The history of an all-time favorite Fair ride: The Ferris Wheel 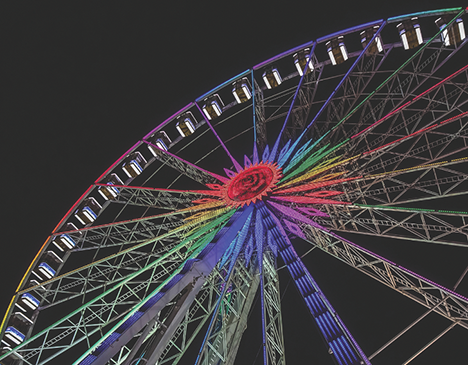 One of the favorite rides at this year’s 2022 Kiwanis Coweta County Fair will be the time-tested Ferris wheel.

It’s the centerpiece of the annual carnival and one that attracts riders, both young and old. In fact, many folks probably have their first memories of a county fair riding the trusty Ferris wheel.

In the late 1800s, few may have imagined that a civil engineer specializing in bridges and other steel designs would help revolutionize not only the skyline of carnivals and fairs, but summertime entertainment as one knew it.

George Washington Ferris, Jr., was not a household name before 1893, but he certainly was afterward. After the Eiffel Tower stretched into the sky for the 1889 World’s Fair, officials in Chicago, which would be hosting the World’s Columbian Exposition in 1893, were looking for something of a similar magnitude to serve as the hallmark of their event. Organizers announced a competition to design the fair’s centerpiece attraction.

Ferris proposed building a 264-foot wheel with suspended carriages to take passengers around for an arial view of the fairgrounds. But other engineers claimed the wheel would not revolve. According to Smithsonian, even the exposition’s organizer Daniel Burnham balked at the plans for Ferris’ wheel, which would feature slender rods that would carry people higher than the recently opened Statue of Liberty, claiming they would be too fragile.

Even though Ferris was not the first to envision and build rotating wheels (smaller incarnations called roundabouts were built and featured in Atlantic City), he was the first to take the wheel to this magnitude and financed much of its building. Ferris’ design had 140-foot tall steel towers, with a 45-foot long axle between them. The wheel had a diameter of 250 feet, with 36 wooden cars that could each hold up to 60 riders. It also was lit up by 3,000 of Thomas Edison’s new light bulbs.

The Ferris wheel was a big hit and made an impression on fairgoers. After the fair, the wheel was moved to Lincoln Park, and later became an attraction once more at the 1904 World’s Fair in St. Louis, Miss. Unfortunately, Ferris went into debt designing and building his vision, and he later died of typhoid fever while embroiled in litigation. His original wheel, which was later demolished, was the only true Ferris design.

But Ferris’s wheel lives on in many forms by ubiquitous copycats, and the name “Ferris Wheel” has become the generic reference for these types of rides. A Ferris wheel is often a staple at amusement parks, local fairs and carnivals and even serves as a permanent sightseeing attraction at attractions around the globe. Pushing the limits of engineering, today’s Ferris wheels reach dizzying heights. The tallest in the world is the Ain Dubai, slated to open in 2020 just ahead of the Expo 2020 in October. The observation wheel will be roughly 850 feet tall (250 meters) and will tower over what was once the tallest wheel, the High Roller in Las Vegas, which stands at 520 feet. Other immense observation wheels include the Singapore Flyer, Star of Nanchang (China) and The London Eye.

The famed Ferris wheel lives on in many cities and towns. Once a modern marvel, it is now a customary sight and hallmark of recreational fun.