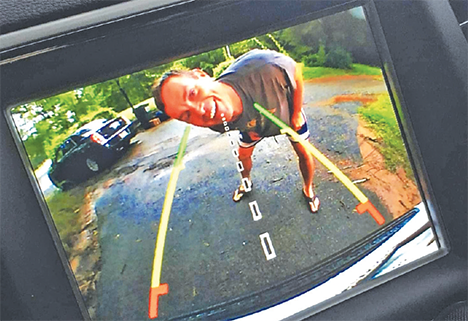 This month, The Paper publishes its Q&A with Sharpsburg Mayor Blue Cole.

Well, I’m Blue Cole, and I’m the mayor of Sharpsburg. I’m also a writer with a head full of characters who are by turns amusing and exasperating. I was elected in 2019 (by real people) and am in the 3rd year of my four-year term. I’m a Sharpsburg native who graduated from East Coweta, married an East Coweta gal, and had East Coweta children. I’ve published four novels and have several more in various states of completion, but mayoring is taking most of my free time now. My wife and I have owned several businesses in Newnan, Sharpsburg, and Coweta County.

I’m one of those people who are irritatingly energetic, and I tend to … stay busy. When I talk, when I work, when I get an idea in my head. A previous mentor told me, quite directly, to “Sit down and be still. Just … be still.” What I took from that was to slow down just a bit, take an extra look, and then proceed. I don’t have to do everything at Blue-speed; I can slow down and let things happen in their own time. (Without a doubt my biggest adjustment from owning my own business to working in government) Right before the pandemic, my wife (I have only one, despite the rumor) got a decorative Christmas quote. Yep, it said … Be Still.

I would have stayed in school. I hadn’t had the ‘Be Still’ talk yet, and I just didn’t know enough to grind through it. Learned a hell of a lesson with that one, and it had a cost. But the best lessons are often sharp ones, and that was no exception.

Aerosmith’s Live Bootleg & Little South of Sanity – two of their live albums, and Alan Jackson’s Precious Memories. The first one. Books? Oh, there are so many.

What was that? I’m deaf as a damn post, but there are times when I identify as ‘Selectively Heard.”

You are hosting a dinner party for six. What five people, living or dead, would you invite and why.

All four of my grand parents, and a writer. Or several. Ferrol Sams, Pat Conroy, Jim Rigney. (Robert Jordan) I was lucky enough to meet all three, and I wish I’d had time to get to know them. As far as my grandparents… that’s an easy one. I’d love to tell when what all I’ve gotten into, swap some stories, and ask advice. This adulting stuff is something else, and I’m still learning.

Name an as yet unfulfilled dream.

Write my best novel. I’m not done with it yet; I had a good run there for a minute, putting out a small novel every year, and getting better with each one. Then I went back to school, got elected, and had other things take up space. There are still stories to tell, and other lives to live.

It’s nothing but God’s grace I’m on this side of the desk. I’d probably have my own business or be a journalist. I could easily have been just a small time hack for a number of publications, trying to be funny and sell a few books as I while away at another. Wait a minute …

Pizza. Worked in the industry for about 5 years, and I’d eat it every day if I had too.

Both. Both are cool, both are a pain the ass, and I don’t want any more until I get the next one. We currently only have two dogs and one cat, but we’ve been as high as 4/2, I think. Little bastards are a pain, but it’s worth it in the long run. We had one sweet puppy that taught me so much, and looking back, I love her more for it.

Romans 5, 3-5 :  Not only so, but we also glory in our sufferings, because we know that suffering produces perseverance; perseverance, character; and character, hope. This does not mean God wants us to suffer, or that he intends it, but that he intends for us to see the road beyond the suffering. I’ve lived such a blessed life, and the negative things I’ve gone through have prepared me for other, tougher things. I will say I prefer the KJV translation : And not only so, but we glory in tribulations also: knowing that tribulation worketh patience; 4 And patience, experience; and experience, hope:  5 And hope maketh not ashamed; because the love of God is shed abroad in our hearts by the Holy Ghost which is given unto us.  This tells me to hope, and trust (have faith) in God’s love. Never regret your hope or faith.

All the things I didn’t think I was ready for: getting married. Being a step-father. Being a father. Getting elected. When all these things happened, I said … aww s***, now what? But I paid attention, tried to learn and always looked to improve.

What advice would you give your younger self just starting out on their own?

Be deliberate and listen to that small, still voice. It has a better track record than I do, and the times I’ve ignored it, I’ve regretted it. Pay attention to the people around you. They are the key to success … and will usually have a greater part to play than you. So invest in them, and invest in your relationships with them.