The Interview: April and Brent Anderson of Senoia Coffee & Cafe 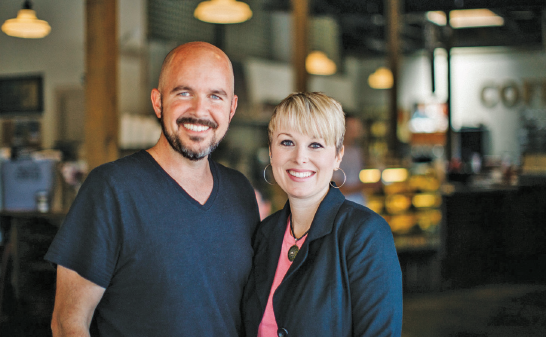 Best piece of business advice you’ve received.
April: Either “Love what you do” or “fake it till you make it.”
Brent: “People aren’t utility pieces in your business plan, people are people … with unsurpassable worth and value.”

If I had it to do over …
April: I would hold my kids more.
Brent: Start my business with more cashflow.

You are going on an extended solo trip. What three albums and three books would you take?
April: Music: U2 Rattle & Hum, Beatles Sgt. Pepper and Otis Redding King of Soul (this is a 4 disc set so I’m either smart or cheating)
Books:  My Message Bible, The Hobbit & Lord of The Rings Collections by Tolkien.
Brent: Music: Guardians of the Galaxy Soundtrack, Bethel-Have it All, Vertical Horizon-Everything You Want.
Books: Bible, CS Lewis Screwtape Letters, Greg Boyd Present Perfect.

Tell us one thing about yourself that few people know.
April: We were extras in Ant Man-made it to the big screen!
Brent: “I’m terrified of needles, I actually passed out when my dog got his puppy shots.”

You are hosting a dinner party for six. What five people, living or dead, would you invite and why.
April: Jesus, Bono, Martin Luther King Jr, Mother Teresa, and Ellen. Why? They all have inspired me, in one way or another, to live unselfishly and give joyfully to change the world around me.
Brent: Jesus, Chris Pratt, Pope Francis, Greg Boyd and The Apostle Paul. Why? They have all inspired me to live fully, give generously and laugh abundantly.

Name an as yet unfulfilled dream.
April: To travel abroad as a family.
Brent: To own my business and home debt-free.

If you weren’t doing what you are, you would be …
April: I would be in radio, television or film.
Brent: Radio host.

Favorite movies(s).
April: All of  The Lord of the Rings and all things Marvel.
Brent: Gladiator and the Iron Man Movies.

Your favorite quote and why.
April: “Seize the moment, remember all of those women on the Titanic who waved off the dessert cart.” Erma Bombeck Why? She comedically reminds us there is no promise of tomorrow, you have to live life to the fullest.
Brent: “For God so loved the world that He gave his only son” -The Apostle John. Why? It ascribes value to me and the world.

Name something that you are extremely glad you did or accomplished.
April: Marrying my husband and founding Backpack Buddies of Georgia.
Brent: Becoming a husband and father, also this year I ran a marathon.

What advice would you give your younger self just starting out on their own.
April: Free yourself now from the prison of insecurity and what people think about you.
Brent: Save more money.