The Weekly Kitchen: A cake that crushes it! 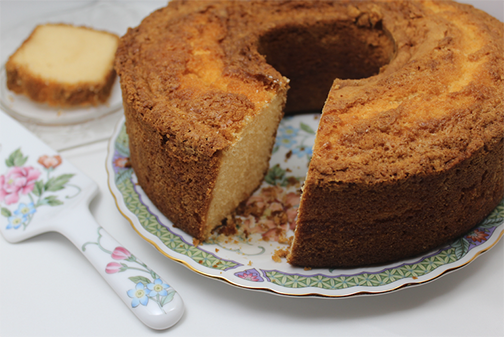 By ANGELA MCRAE, Special to The Weekly

Ever heard of Seven-Up Cake? I can’t recall ever baking one, but I’ve sure enjoyed eating that cake before, and cakes made with soft drinks have been around awhile.

Foodtimeline.org says that cooks began using soft drinks in cakes early in the twentieth century, although it’s unclear whether the recipes originated in company test kitchens or in the kitchens of home cooks. According to the site, “Food historians trace gelatin salads made with soft drinks … to 1912. Cake recipes were a later invention, probably sometime after World War II.”

Coca-Cola Cake is another popular cola cake, and I tried to make one during the early years of my marriage. My recipe was a failure, alas, and the cake was a dry, dreadful mess. I tossed it near the woods at the back of our property, and a week later, Alex reported that the cake remained untouched. Even the critters have standards, I suppose.

I learned that yet another fizzy beverage has been used in baking some good cakes over the years, and that’s Orange Crush. While antiquing recently, I came across a vintage recipe tin with an old typewritten recipe for Orange Crush Cake. The recipe had some grease stains, which I always take as a good sign.

The simple, straightforward recipe sounded like basically an orange-flavored pound cake. Turns out, the hardest thing about making it was learning to distinguish between all the orange-flavored soft drinks at the grocery store. I didn’t find Orange Crush at the first two stores I visited, and I almost settled on a competitor’s orange drink. But I kept looking since, after all, the recipe is titled Orange Crush Cake. I searched online and found that two of our larger grocery stores stock Orange Crush soft drinks, so I happily purchased one.

Could I have used another orange-flavored soft drink? Maybe. But when I researched orange drinks online, some reviewers of these drinks found Orange Crush to be the sweetest, a quality that seems desirable when baking cakes.

The resulting cake, I’m happy to report, will not land in the woods this time. It was quick and easy to whip up, and the pound-cake-like confection has a pleasant but not overpowering orange taste. I still find soft drink cakes to be something of a novelty, and this orange-flavored one is a cake I’ll certainly be making again.

Preheat oven to 325 degrees and prepare a tube pan with grease or cooking spray (I used Pam). In bowl of electric mixer, cream shortening and butter, add sugar, and combine well. Add eggs one at a time, mixing after each addition. Add flour and salt and combine. Finally, add orange flavoring and Orange Crush. Combine well and pour into pan. Bake for 1-1/2 hours. Let cool on a baking rack for 10-15 minutes before removing cake from pan.

Food Safety during a power outage