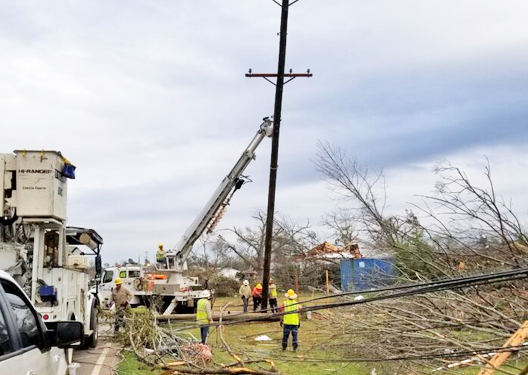 Editor’s Note: The below story is from the Coweta-Fayette EMC website and the impact the March tornado had on its service area. Coweta-Fayette EMC had over 200 linemen in the field working alongside clearing crews to have everyone back on ASAP.

Alerts began sounding around 11:45 p.m. and just a few minutes after midnight on Friday, March 26. An EF-4 tornado, with winds estimated at over 170 mph tore through Heard, Coweta and into Fayette County leaving a path of devastation and forever changing the landscape of the area.

By 1 a.m., Coweta-Fayette EMC (CFEMC) had crews on the ground surveying damage and making plans for the massive restoration effort. Over 6,000 members were without power and we had already found 30 broken poles. That number now looks small in comparison. By the end of the storm, there were 120 broken poles carrying both transmission and distribution lines, to be repaired before service could be restored to the members of CFEMC who could still receive power.

By 8:30 a.m. on Friday, March 26, it was apparent West Coweta suffered the most damage, especially in the Smokey Road, Old Corinth, Belk Road and LaGrange Street areas. The broken pole count had risen to 70, but we had restored power to all but approximately 1,200 members through rerouting power from other sources.

There was massive amount of debris making roads hard to travel and the restoration efforts slow. However, our mutual aid agreements had been activated and before long, there were over 70 right-of-way crews clearing the way for the more than 200 linemen in the field working to restore power in these hard hit areas. Special thanks to Asplundh, Thompson Construction Inc., Palmetto Line Clearing, Mastec, Greystone Power, Snapping Shoals EMC, Southern Rivers EMC, Flint Energies, Diverse Power, and Carroll EMC for assisting in this effort.

At 9 p.m. on March 26, CFEMC estimated only 600 members remained without power, all of these in the hard hit Smokey Road area. Crews continued working overnight and by 8 a.m. on Saturday, March 27, that number was down to 320. As the day moved forward over 70 poles had been replaced, however new broken ones were being identified each times our crews moved into new areas. As night fell, CFEMC and our sister EMC’s had restored power to over 95% of our members.

Sunday, March 28, dawned with the news thunderstorms were expected. Our crews were finally about to make it into the Smokey Acres subdivision. Until today, we had not been able to get trucks into that area. Approximately 30 more poles were identified as broken and needing to be replaced. As the afternoon approached the thunderstorm rolled in and added to the pole count. Crews were also having to hand dig holes for pole replacement as well since they were having to work around buried gas lines in the area. Despite the weather, by 8 p.m. crews had all but about 40 homes restored. Those homes were isolated in an area near Unity Church, Lagrange Street and Meadowbrook Lane.

On Monday, March 29, crews returned to this hard hit area and got the last homes on who could receive power .

We at CFEMC want our members to know we sympathize with those of you who have experienced loss during this time. You are part of the EMC family and we know recovery will take time. We want to thank each of you who shared your experience with us, dropped a comment on our social media pages or just said a kind word to our crews working in the field. We live and work here too and we will be beside you rebuilding #CowetaStrong once again.

To view photos and videos from this story, click here: https://utility.org/tornado-devastates-parts-of-coweta-fayette-emc-service-area/.