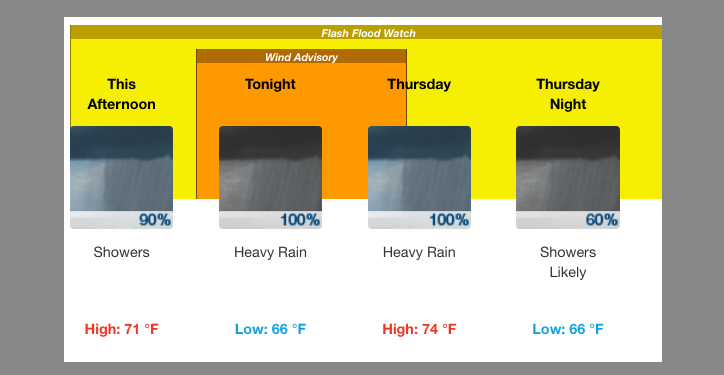 7:30 a.m. THURSDAY UPDATE – The Flash Flood Watch has been cancelled but the Wind Advisory remains in effect until 11 a.m. Showers and possibly a thunderstorm continue to be in today’s forecast with East wind at 5-15 mph (gusts to 25), becoming north in the afternoon. High near 75 degrees.

Both a Flash Flood Watch and a Wind Advisory have been announced for Coweta County by the National Weather Service in Peachtree City.

A Flash Flood Watch is in effect for Coweta and surrounding counties until Friday morning.

Periods of heavy rainfall are expected through Friday morning as the remnants of Hurricane Sally track across Georgia. At this time, rainfall amounts of 3 to 6 inches are expected during the Watch with some locally higher amounts possible. The highest amounts of rainfall are centered along a line from Columbus to Griffin to Athens where amounts could total 5 to 7 inches.

A Wind Advisory is in effect for Coweta and surrounding counties from 6 p.m. Wednesday to 11 a.m. Thursday.

East winds will be 15 to 25 mph with gusts up to 40. Gusty winds could blow around unsecured objects. Downed trees and power lines, along with power outages, are possible due to the high winds and saturated soils.

Tonight, the forecast calls for a 100 percent chance of showers and thunderstorms with some producing heavy rain. New rainfall amounts will be between 2 and 3 inches with a low around 66 degrees.

And for Thursday, expect more of the same through much of the day with a 100 percent rain chance with another 1 to 2 inches possible. The high temperature will be near 74.