Zen Notes & Musings: Mr. Personality Cookies are here; another Popeyes on the way 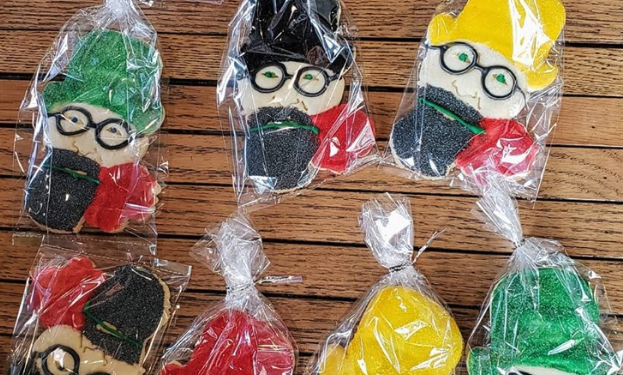 Nissan North America is renewing its partnership with Habitat for Humanity with a $1 million donation to continue to help families build affordable places to call home. For the past 14 years, Nissan has been a Habitat for Humanity supporter, contributing more than $17.9 million since the partnership began in 2005. Newnan is home to a Nissan dealership, as well as Habitat’s ReStore store.

Big kudos to the Coweta’s Court Appointed Special Advocates (CASA). They were recognized and awarded the Established Affiliate Award from the state CASA during its annual conference. CASA  volunteers work with foster children and advocate for them in the court system. The Coweta CASA covers children in Coweta, Meriwether and Heard counties.

The Beer, Bourbon and Wine Tasting fundraiser brought in more than $53,000. The annual event, held at the historic Train Depot, included wines, bourbons and beers from around the world available to taste. The money raised goes to The Boys and Girls Clubs of Metro Atlanta, which includes the two Newnan clubs.

Humans have a random expiration date.

Cancer Treatment Centers of America (CTCA), Atlanta, has signed on as the title sponsor for Team Assistance in Healthcare in the 2020 Race Across America. The two team members are Marsha Suber of Senoia, who serves as vice president of oncology services and chief nursing officer at CTCA Atlanta (here in Newnan), and veteran racer Martha Hall of Peachtree City, who works for Fayette County State Court as an accountability court coordinator. The goal of Team AIH is to raise $100,000 for Southeastern Assistance in Healthcare. The local nonprofit provides financial support to those who are undergoing active cancer treatment.

The Kiwanis Club of LaGrange has committed to a $25,000 endowment that will support students at West Georgia Technical College. This endowment – known as The Kiwanis Johnson-Frear Endowment – is named for two Kiwanians who funded the effort through the club’s annual clay shoot tournament.

There is a grandmother out there somewhere who really does have the most handsome grandson.

Piedmont Newnan Hospital continued its partnership with Coweta County School System by donating $15,000 to purchase misting tents for each of the three high school’s athletic departments as well as additional AED devices. Heat-related illness can be very serious and, according to the Center for Disease Control, is the third- leading cause of death among high school athletes. “We are thankful to have Piedmont Newnan Hospital support our school system each year with a donation to keep our students safe and healthy,” said Evan Horton, Assistant Superintendent for Student Services and Safety, Coweta County School System.

Remember to check out “The Journey” in The Paper, a column written by Samantha Brazie focusing on health and body image. Here’s a great nugget from last month: “Crash diets are quick but unsustainable weight loss unless you develop some sort of eating disorder to maintain it. Your body craves the ingredients of nutrient-rich foods and there is no substitute for that unless your doctor deems medically necessary.”

People who grocery shop in their pajamas have either given up on life or are living it to the fullest.

Piedmont Newnan’s First Friday Hero program recently honored Coweta County 911 Communications Officer Tim Eason for going above and beyond the call of duty. Recently, a 911 call came in regarding a male who collapsed in cardiac arrest. A bystander started Eason continued to coach CPR and manage the rescue until fire department personnel and medics arrived and could administer AED shocks. Because of Eason’s coaching and assessment of the situation, along with the bystander performing CPR, the cardiac arrest patient had a positive outcome.

The Coweta County School System, school board members and several community organizations welcomed 117 new teachers to the Coweta school system at an annual breakfast and orientation at the Nixon Centre for Performing and Visual Arts before the start of the school year.

President Trump canceled a planned state visit to Denmark after that country refused to discuss selling Greenland to the United States. Greenland is a territory of Denmark.

Hundreds of Delta Air Lines employees volunteered over a two-month period to help renovate and repurpose a Christian City cottage originally funded by Delta Air Lines employees in 1972. The Delta-Jim Turner Memorial Cottage that served as a home for children for more than four decades now has a new life as a duplex guest home serving the children and senior adults living at Christian City, a non-profit located on a 500-acre campus just nine miles south of Hartsfield Jackson Atlanta International Airport.

Before video games, we had two world wars.

A new Popeye’s will be opening up near Costco at Fischer Crossings Blvd. Costco opened Aug. 22.

West Georgia Technical College had another record breaking year at its annual fundraiser, Black Tie & Boots. The WGTC Foundation raised $61,000 for scholarships and general student support at the 18th annual event earlier this month with over 40 event partners participating.