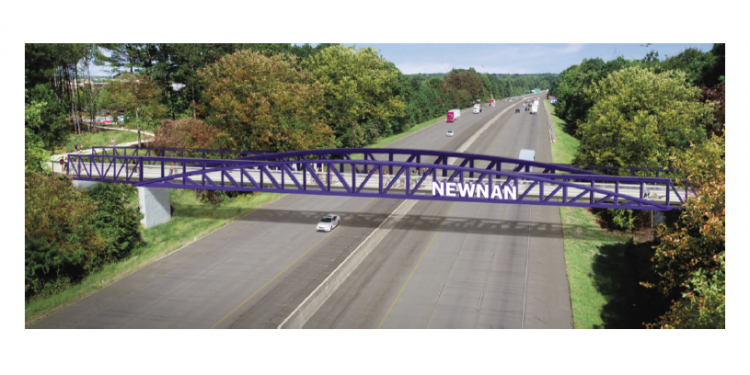 Sen. Matt Brass (R – 28, Coweta County) will serve as chair of the Banking and Financial Institutions Committee for the first session of the 156th Georgia General Assembly. “These committee chairs are uniquely qualified to develop real and lasting solutions aimed at building a better Georgia,” said Lt. Governor Geoff Duncan.

In Norse, the name Siri means a “beautiful woman who will lead you to victory.”

The LINC bridge over Interstate 85 is now officially open with a recent ribbon cutting. This is a major section of the multipurpose trail project. And hey, it’s quite a view. (illustration above from friendsoflinc.org)

Since the start of COVID-19, daily fast food consumption has increased by 37 percent, according to MBLM’s Brand Intimacy COVID Study, which analyzes brands based on emotional connections during the pandemic. Although the fast food industry placed sixth out of 10 industries, overall performance has improved six percent since the previous study. The industry also ranks #1 for the archetype of indulgence, indicating that during challenging times, consumers turn to brands long associated with comfort, pleasure and pampering.

Chick-fil-A regained its 2019 ranking as the fast food company with the strongest Brand Intimacy, which is the emotional science behind the bonds we form with the brands we use and love. McDonald’s moved up one spot to second place in the BIS COVID Study, while 2020’s top brand, Starbucks, moved to third. The remaining brands in the top 10 for the industry are KFC, Dunkin’, Dominos, Pizza Hut, Subway, Taco Bell and Wendy’s.

The Dutch army only had one tank during WWII.

The University of West Georgia’s College of Education (COE) was again praised for its efforts in advancing the health and wellness of UWG’s campus community and the west Georgia region at large. Only 166 universities and colleges are honored by the American College of Sports Medicine. Of those, only 77 receive a gold level of designation. UWG has achieved both honors for the fifth consecutive year, according to a university statement.

Officer Greg VanSant with the Newnan Police Department was recently promoted to Lieutenant. Lt. VanSant is unit supervisor of The School Resource Unit.

When you snap your finger, it moves about 20 mph.

Cancer Treatment Centers of America (CTCA), Atlanta nurse Kedra Phillips-Flippin recently received her second DAISY Award for going above and beyond to meet patients’ needs. Presented by the DAISY Foundation, the award honors and celebrates direct care nurses, faculty and students in more than 3,400 healthcare facilities around the world.

The first baby born at Piedmont Newnan in 2021 arrived on Jan. 1 at 8:58 a.m. Parents Nerline Phanor (mom) and Jozue Sanon (dad) welcomed Zaniyah Sanon, a baby girl, who weighed 6 pounds, 5 ounces and measured 20.5 inches long. She is their first child and arrived a few weeks early not being due until Jan. 17.

The Georgia House of Representatives’ Committee on Assignments recently reappointed State Representative Lynn Smith (R-Newnan) as the Chairman of the House Natural Resources & Environment Committee. Rep. Smith will also serve as a member on the Appropriations Subcommittee on General Government and the Special Committee on Election Integrity, Creative Arts & Entertainment, Legislative & Congressional Reapportionment and Rules committees.

The Drug Free Coweta Coalition announced that a federal Substance Abuse and Mental Health Services Administration (SAMSHA) grant has been secured.  The $625,000 grant, which spans five years and provides $125,000 per year, will be used to continue and enhance the work of the coalition in opioid and prescription drug education and misuse prevention.

Anheuser-Busch won’t be advertising its Budweiser brand during Super Bowl LV. Instead, it’s donating the money it would have spent on the ad to coronavirus vaccination awareness efforts. This will be the first “miss” by Budweiser in 37 years. Pepsi and Coca Cola also won’t be advertising those particular brands.

If interested, Gov. Brian Kemp penned an op-ed titled “Here’s How We Kept Georgia Open For Business.” It’s easier to search for it than posting the actual link, trust us, it is waaaaayyyyy long.

The Coweta County Public Library System and Volunteers from the AARP Foundation have partnered once again to prepare federal and state tax returns for free. Tax preparation and free electronic filing is scheduled for every Wednesday and Thursday, beginning February 3 and ending April 15. The tax prep will take place at only one location – the Central Library, which is located at 85 Literary Lane in the Thomas Crossroads area. Meetings are by appointment only and can be made by dialing 770-683-2052.