Breast Cancer Awareness Month: Women have some control regarding their risk 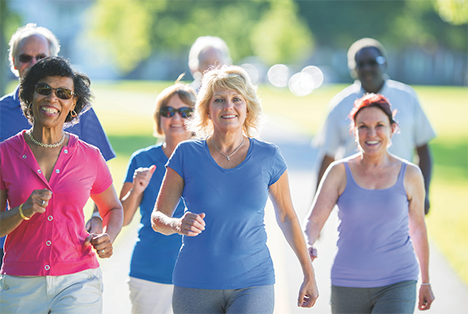 No one, regardless of their age, occupation, skin color, or socioeconomic status, is immune to cancer. In fact, individuals might be hard pressed to say no one in their family and/or circle of friends has been diagnosed with cancer at some point.

According to the National Cancer Institute, there were 18.1 million new cancer cases across the globe in 2018. Among women, when excluding non-melanoma skin cancer, no cancer was more prevalent globally than breast cancer. The World Cancer Research Fund reports that, in 2018, breast cancer accounted for 25.4 percent of all new cancer diagnoses in women. That figure is nearly three times as high as the percentage of cases of colorectal cancer, which accounted for the second most new cancer cases diagnosed in women in 2018.

• Physical activity: The CDC notes that women who are not physically active have a higher risk of getting breast cancer than those who are. The Office on Women’s Health, a division of the U.S. Department of Health & Human Services, notes that women should get two hours and 30 minutes of moderate-intensity aerobic physical activity every week or 75 minutes of vigorous-intensity aerobic activity each week. This should be accompanied by muscle-strengthening activities on two or more days each week. Carrying around extra weight can make moving around more difficult, so the Office on Women’s Health urges larger women to start slowly if it’s been awhile since they exercised. In addition, aging women can speak with their physicians for advice about exercise regimens they should or need not avoid.

• Taking hormones: The CDC notes that hormone replacement therapies that include both estrogen and progesterone taken during menopause can increase a woman’s risk for breast cancer when taken for more than five years. In addition, the CDC reports that oral contraceptives, such as birth control pills, have been linked to a higher risk for breast cancer. Women can speak with their physicians about how to control hormone-related risk factors for breast cancer.

• Alcohol consumption: Studies have found that the more alcohol a woman consumes the greater her risk for breast cancer becomes.

Smoking, exposure to chemicals that have been found to cause cancer and changes in hormones related to working night shifts are some additional risk factors for breast cancer that women may be able to control.

Breast cancer affects millions of women across the globe each year. Though that may instill a feeling of helplessness, women should know that many risk factors for breast cancer are within their control.

Bingo Day at the Carnegie set for ...