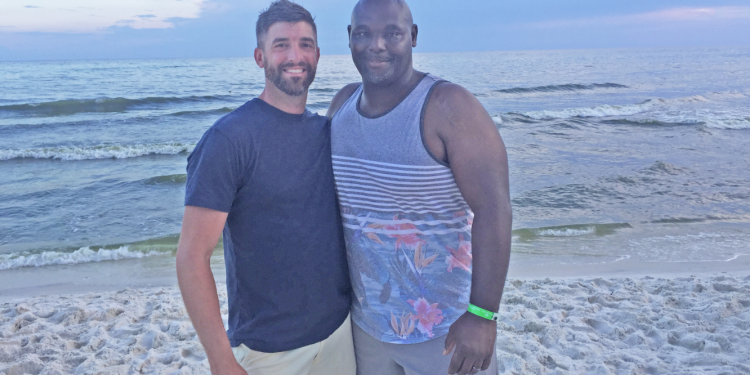 Save a life, make a friend. That describes Coweta-Fayette EMC journeyman Dustin Arrington in the wake of his dramatic June rescue of a drowning man in a riptide in the Gulf of Mexico off Panama City Beach, Fla.

The 15-year Coweta-Fayette EMC veteran recalled just stepping onto the beach that fateful June 23 morning with his wife and daughter when he heard a commotion and people congregating on one part of the beach. He saw three men in the water before a sandbar, screaming for help.

Despite having no water rescue training, Arrington put his daughter in his wife’s arms, emptied his pockets and went into the water.

“Before I realized it, I was with the biggest man,” Arrington says. “He went under one time and came back up. I put his arm on my arm and started for shore. He weighed 300 pounds and was unconscious.”

Arrington treaded water until his toes hit the sand, then started dragging the man. He was later helped by two other men who dragged the man to safety.

The other two people, the man’s son and nephew, made it back to shore after a cabana boy swam out to them with life jackets.

“There’s no doubt God had his hand on us that day,” says Arrington. “I felt the rip current and waves and thought to myself, ‘You’re gonna drown.’”

The man, a firefighter from Murfreesboro, Tenn., was in the ICU for two days. Arrington and the man met on the beach following his release from the hospital, and the two have become quick friends. Arrington notes that the man was trained in swift water rescue but had driven seven hours after working the night shift and went immediately to the beach with his son and nephew.

“We talk pretty regular, and he says we’re part of his family now,” says Arrington, adding they are planning to get together either in metro Atlanta or in Tennessee.

CFEMC CEO Chris Stephens said he wasn’t surprised to hear one of our own was willing to respond in a time of need.

“Linemen are first responders,” Stephens said.   “Whether they are restoring power during inclement conditions or helping someone in need, they are always the first to assist.  Dustin’s heroic effort is a perfect example of who linemen are,  brave men and women who put others first.  I am extremely proud of Dustin but not surprised of his actions.”

Arrington is among 14 employees from five EMCs in Georgia to be recognized with a Lifesaving Award, which commends EMC employees whose quick thinking and actions are instrumental in safeguarding others from dangerous or potentially deadly situations.