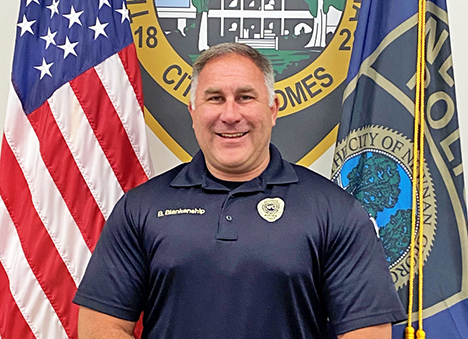 Pictured above is new Police Chief Brent Blankenship, a 22-year veteran in law enforcement with City of Newnan.

The City of Newnan has named a new police chief following the retirement of Chief D.L. “Buster” Meadows on June 30, 2021.

Brent Blankenship, who had served as a lieutenant for the Newnan Police Department, will take on the reins of Chief of Police on July 1, 2021.

Blankenship, who has spent 22 years in law enforcement with the City of Newnan, holds a bachelor’s degree from LaGrange College. He joined the department in 1999 as a patrolman, worked on the bike patrol unit, and later working his way to traffic, serving as a detective and sergeant. In 2018, he was promoted to Lieutenant of the Office of Professional Standards.

“He [Blankenship] had all the qualities we were looking for to lead the City of Newnan Police Department. He has proven himself as a leader in the department over the past 22 years with his dedication, integrity, and knowledge,” said Newnan City Manager Cleatus Phillips. “I am confident that his vision and goals as the Newnan Chief of Police will align exceptionally well with our police department, our city organization, and also with our community.”

Meadows served 47 years with the City of Newnan and in law enforcement. During Meadows’ tenure, the department has increased in size with little turnover and focused on community relations efforts by creating the department’s community outreach department, which among other programs, has implemented programs such as the Guitars Not Guns initiative.

“I can’t say enough about Chief Meadows and the legacy that he leaves behind,” said Newnan City Manager Cleatus Phillips.

“He has taken a familiar approach to manage the staff and the community while responding to the community’s growth with professionalism,” said Hasco Craver, Assistant City Manager.

The Little Things: More than just a ...