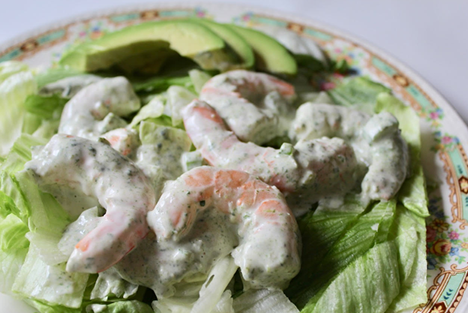 Each spring, I begin looking for new salad recipes to try, and I especially like a hearty salad that can be eaten as a meal for lunch or dinner. Because one of my obscure hobbies is recreating recipes from old department store restaurants, I decided to try a new one that hails from Sakowitz Bros., a store in Houston, Texas, whose famous salad recipe was shared in a 1986 cooking column in a Houston newspaper.

As with so many of the great old department stores, an immigrant family founded this one. Tobias and Simon Sakowitz, whose father was a Ukrainian immigrant, founded a store in Galveston in the early 1900s and later opened a store in Houston before eventually expanding to become a popular retail chain. The stores closed in 1990, but thanks to magazine and internet articles, the legend lives on.

Sakowitz was the place for luxury shopping in Houston. The flagship store had a tropical mural in the shoe department and an “accessory bar” where you could buy your midcentury modern Lucite handbag. If time travel ever becomes a reality, you’ll find me scoping out some old department store every day.

For years now, I’ve been seeing references to Sakowitz’s Sky Terrace, a charming restaurant decorated in Gulf Coast Colonial style, complete with curved white wrought-iron railings at the entrance. One menu item that seems to have been such a hit with customers is the Sakowitz Shrimp Salad. I wondered what made the salad so special, and now that I’ve sampled it, I’m convinced the secret ingredient is anchovy paste. That particular ingredient has never appeared on my grocery list before, but it was surprisingly easy to find in stores. It was key to making this sauce, and as Sipsey so famously said in the movie Fried Green Tomatoes, “The secret’s in the sauce.”

Anyone can toss some shrimp and lettuce together, but this homemade salad dressing is where the magic is.

Lightly mix the shrimp, celery, mayonnaise, lemon juice and salt. Set mixture aside to chill in the refrigerator while you prepare the sauce. To make the remoulade sauce, combine all sauce ingredients and blend well. (I pulsed them in a food processor for a few seconds.) Pour sauce into a large bowl, add shrimp mixture, and combine. Toss well, and serve sauce-covered shrimp on a bed of iceberg lettuce with avocado slices. Yields 6 servings.

#Repost @cal_winters ... After four years I have f