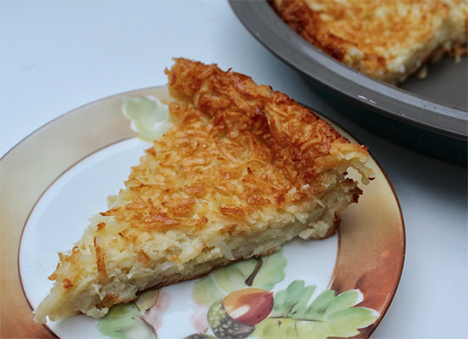 I read something the other day that gave me pause. I think it was on social media, so naturally, I can’t recall the source, but it said this: “Impossible is just an opinion.”

What do you think about that? I like it.

When I was a teenager, bedroom wall posters with clever sayings were the equivalent of today’s Facebook memes, and one of my favorite posters said, “The one who says it can’t be done should never interrupt the one who is doing it.” Today’s updated version making the rounds on social media says this: “When someone says you can’t do it, do it twice and take pictures.”

What’s all that got to do with a recipe, you ask? Well, my point is that sometimes, we like to think that we’re doing something we’ve been told is “impossible.”

In the old cookbooks I’ve collected over the years, I’ve noticed that “Magic” this and “Impossible” that are favorite adjectives in the titles of recipes. And this Impossible Pie is one that I have enjoyed making.

According to foodtimeline.org, a great source for food history, “The origins of Impossible Pie (aka mystery pie, coconut amazing pie) are sketchy at best. A survey of newspaper/magazine articles suggests this recipe originated in the South (where coconut custard pies are popular). It was discovered by General Mills (Bisquick) and General Foods, who capitalized on the opportunity to promote their products. Corporate recipes surfaced in the mid-1970s. There are conflicting reports about the dates of introduction. The earliest recipe we have on file was published in 1968.”

Another article I read said the recipe gets its name because it is “impossibly easy” to make.

What’s so great about this particular pie recipe is that you don’t have to make a separate piecrust, and you can mix everything at one time in the blender (or using an electric mixer; I suspect the blender was the gadget favored by sixties-era cooks).

The first time I made this pie, I was skeptical about it turning out well, so I was absolutely delighted to slice into it and find that it set, cut and tasted just perfect. For someone like me who doesn’t enjoy making piecrusts, this pie recipe is definitely a great one to have on hand.

If you are piecrust-challenged, too, be sure to add this Impossible Pie to your recipe box. And when it turns out especially tasty and pretty, make it twice and take pictures!

Preheat oven to 350 degrees and prepare a 10-inch pie pan with cooking spray. Combine all ingredients in blender (or bowl of an electric mixer) and blend for 3 minutes. Pour mixture into pie pan and bake for 1 hour. Like magic, the pie will have formed a crust, a middle layer of custard, and coconut on top. Brilliant—and more than possible!

How to keep pets occupied while you’re ...