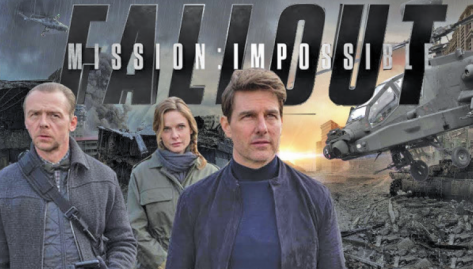 After taking delivery of a self-destructing video, in which we learn that a new villainous organization is in the market for nuclear materials in order to build three bombs, the IMF is assembled to stop them.  The stripped down team consists of Luther Stickell (Ving Rhames), Benji Dunn (Simon Pegg), and, of course, Hunt.

There’s a lot of story, back-story, relationships, characters, and entanglements that are thrown at the viewer at a dizzying pace.  Credit belongs to writer/director Christopher McQuarrie, who really goes flat-out here both in writing the spy material and building convincing action sequences.  For example, there’s a fight scene in a bathroom that is alone worth your money. It rivals the bathhouse sequence in Cronenberg’s “Eastern Promises,” while reminding us of the tongue-in-cheek fun that pushed Cameron’s “True Lies” gleefully forward.

“Mission: Impossible – Fallout” is a propulsive viewing experience, captured at a true break-neck pace, even if the story is impossibly foolish. And the film never really gives you a breather, as the closing sequence is a real stunner.

Don’t Worry, He Won’t Get Far on Foot – FIX
Joaquin Phoenix is a confusing and compelling screen presence. I like him in almost everything, but “like” is the wrong word.  In the right role, he’s perfect. This is why the announcement that he will be playing The Joker in an upcoming comic book adaptation is so interesting.  He’s the most unpredictable actor working today, even if his mannerisms and mumbled speech cadence is becoming all too familiar.

Phoenix’ prickly on-screen persona is in full display in Gus Van Sant’s “Don’t Worry, He Won’t Get Far on Foot.”  In the film, Phoenix plays late cartoonist John Callahan, who after a crippling car accident found his true calling drawing panels for newspapers and magazines exposing a scabrous humor, that was reluctantly embraced by sophisticated readers.  The film isn’t a comedy, but it wants to be one, I think, on a dark level. Rather than hearty laughs, the film is an exploration of Callahan’s efforts to find sobriety and himself. And for those with experience with addiction issues, the movie is spot-on and essential.

What I like best about “Don’t Worry,” aside from Phoenix’ excellent acting, is the light almost documentary approach that often marks director Van Sant’s best work.  The auteur responsible for mainstream pleasers “Good Will Hunting,” “Finding Forrester,” and “Milk” seems more comfortable when he’s not beholden to studio and producer requirements.  And for every indulgent “The Sea of Trees” we get an “Elephant.”

Mamma Mia! Here We Go Again – FIX
A singalong affair, this one is a must for fans of the first film and of ABBA. “Mamma Mia! Here We Go Again” is a continuation of the bright, cheery jukebox musical that became an international sensation.  In this outing, we follow Sophie (Amanda Seyfried) as she opens a hotel on the Greek island to honor her late mother Donna (Meryl Streep). But as Sophie struggles to plan a grand opening party, she learns about her mother’s fun past.

Taking place in two time periods, the present and 1979, we vividly see the young Donna (Lily James of “Cinderella” and “Baby Driver”), as she woos the three men that now serve as Sophie’s three “fathers.”  It’s all delightful and ridiculous fun, if, also, a bit of a lip-sync affair that masquerades as a musical. Oh, and Cher performs, showing off her ageless looks and diva vocals.

Woman Walks Ahead – FIX
“Woman Walks Ahead” is a potentially delicious combination of talents—actress Jessica Chastain, director Susanna White, and writer Steven Knight.  And White and Knight choose to go small with varying degrees of success.

The true story involves portrait artist Caroline Weldon (Chastain), as she travels by train from New York to Dakota in the 1890s to paint Sitting Bull (Michael Greyeyes).  At first, she has merely artistic goals in mind, but her naivety quickly melts away, and she becomes involved in the Lakota people’s struggle. Weldon thinks that she can use her position to help, but comes to understand that the conflict is multi-layered and beyond her.

A real slow burn, performances are uniformly solid if featured in a restrained and tedious package.  Some viewers might think this film about a portrait artist and her subject evolves as the paint dries.  But there’s something important to the angst on display. The story is not nearly as monotonous as this year’s release of Stanley Tucci’s “Final Portrait,” which I also appreciated.  By contrast, the action in “Woman Walks Ahead” is enough to sustain viewer attention without glamorizing the historical events.

August Releases to Watch Out For
Aug. 10 – The Meg
When a 70-foot shark is discovered cruising the ocean looking for things and lots of people to eat, action superstar Jason Statham dons fins and diving gear.  The martial artist known also as the “Stath” should get a chance to punch a shark at some point. Still, even if that never happens, the trailers for “The Meg” tease scary scenes, with “Jaws” like bravado.  The man-eating shark looks crazy huge, and the eclectic cast is promising with “The Office’s” Rainn Wilson making an appearance, alongside Chinese star Bingbing Li.

Aug. 10 – Blackklansman
Spike Lee tackles the improbable true story of Ron Stallworth (John David Washington), a Colorado police officer who manages to infiltrate the Ku Klux Klan.  But Stallworth’s got a bit of a problem: he’s black! Of note here is “That 70s Show’s” Topher Grace playing a young David Duke and “Last Jedi” star Adam Driver as a fellow officer who helps Stallworth. “Blackklansman” might be one of the year’s most provocative and entertaining films.

Aug. 17 – Crazy Rich Asians
With an almost all-Asian cast, and one terrific trailer, this might turn out to be the biggest romantic comedy of the year.  Based on the global best-seller, “Crazy Rich Asians” follows a New York girl named Rachel Chu (“Fresh off the Boat’s” Constance Wu), as she falls for a nice and devastatingly handsome guy from Singapore.  But when she visits the homeland to meet his family, Rachel is shocked to learn how crazy rich he really is. Also, in order to marry her love, she’s gotta win over his controlling mother (played by martial artist extraordinaire Michelle Yeoh).  The visuals are pure eye-candy, based on the sumptuous trailer.

Aug. 24 – The Happytime Murders
“The Happytime Murders” is a muppet movie with an “R” rating.  The red band trailer (warning it’s not safe for work) teases a movie about what goes on with the muppets when the kids are not around. Will the lovable puppet mythology survive a stream of raunchy jokes and adult situations? Well, what’s reassuring, in a way, is that this movie is directed by Brian Henson, son of the late muppet creator Jim Henson. The story is about a series of mysterious murders of beloved puppet stars of a 1980s children’s TV show.  And to stop the ugly, murder-spree, a disgraced Los Angeles puppet/muppet police officer and his human partner (Melissa McCarthy) must take up the case. Without prejudging this one based on my childhood memories of the characters, I have to admit that the trailer is irreverent fun.

••••••••••••••••••••
Our columnist Jonathan W. Hickman is an entertainment attorney, filmmaker, college professor, and novelist. Below are his takes on films set for or already released during the month of July. More about Jonathan can be found by visiting http://filmproductionlaw.com/.