The Film Fix: What’s in Theaters, Streaming in February 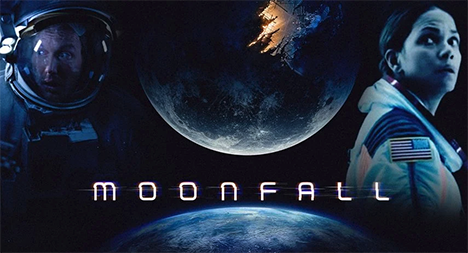 Moonfall (February 4) – Disaster movies date back to the art form’s beginning. And director Roland Emmerich found his groove with blockbuster examples of the genre like 1996’s “Independence Day” and 2004’s “The Day After Tomorrow.” With “Moonfall,” Emmerich puts the planet in peril once again.

This time the moon is pushed from its orbit and hurdles on a collision course toward Earth. Of course, all is lost unless a small, intrepid team can make an incredible last-ditch effort to avoid, yes, DISASTER! Halle Berry and Patrick Wilson play astronauts, and “Game of Thrones” star John Bradley, a conspiracy theorist with information that may save humanity, tags along for the outer space ride.

While Netflix’ “Don’t Look Up” mined similar material with preachy, divisive results, Emmerich’s track record promises a popcorn flick that should be broadly appealing. Could this be just the type of film that audiences will embrace on the big screen?

Space Force (February 18) – The improbable second season of the Steve Carell comedy series is apparently getting a second go. There were laughs the first time around, but it’s hard to get excited about another helping of the uneven combination of slapstick and political satire. Of course, what do I know? I panned “Don’t Look Up,” which became a massive hit for the steamer. If you didn’t know, Carell plays a somewhat clueless general who takes over a new branch of the armed forces with predictably ridiculous results. Goofy supporting turns by John Malkovich and Lisa Kudrow were the highlights of season one.

Free Guy (February 23) l Fix Rating 7/10 – “Free Guy” is a fun and spirited take on virtual reality themes introduced in other similar movies. Ryan Reynolds is his typical affable self, as his Guy naïvely traverses the digital plane with newfound freedom. The film’s first half is inventive and entertaining, while the closing third falls comfortably into a familiar action-packed conclusion. Theatrical box office success almost guarantees a sequel.

Last Week Tonight with John Oliver (February 20) – Although this show has been on break for some time, host John Oliver kept things fresh on YouTube with humorous mini-segments. In one much-needed rant, Oliver turned to YouTube to point out the insanity of the Da Vinci Code franchise. It’s been great fun tuning into his shorter offerings, but on February 20, he resumes the popular longer format. Expect more thought-provoking and funny rants from the British comedian and witty presenter.

Pam & Tommy (February 2) l Fix Rating 7/10 – This explicit and irreverent take on the rocky, whirlwind marriage between Pamela Anderson and Tommy Lee is a profane, nostalgic romp. Lily James and Sebastian Stan play the title couple perfectly, featuring the plastic surgery, tattoos, and the works. But the surprise is the transformation of Seth Rogen into an unrecognizable carpenter, who plays an outsized role in the release of the infamous sex tape in the mid-1990s. Although the ripped-from-the-headlines story may be historically accurate, it’s the scenes with Tommy Lee’s talking member that will likely be one of the most memorable takeaways.

Severance (February 18)  l Fix Rating 7/10  – So many filmmakers try to catch the quirky magic of something like “Being John Malkovich,” the unique romance of “Eternal Sunshine of the Spotless Mind,” or the unhinged, gonzo qualities of “Sorry to Bother You.”  “Severance” will remind you of those excellent films. This nine-episode series is a slow burn, but it’s a deadly serious strange dystopian narrative that will also remind viewers of Amazon’s “Homecoming” and FX’s “Legion.”

In “Severance,” Adam Scott plays Mark, a depressed widower who takes a job with the mysterious Lumen Industries. As part of his orientation, he agrees to undergo a surgical procedure whereby a device is implanted in his brain.

This device bifurcates his memories, separating his work memories from those in his personal life. This implant means that at home, he remembers nothing that took place at work. And at work, he can’t remember anything from home. Talk about not taking your work home with you. The series is partially directed by Ben Stiller, with Patricia Arquette and Christopher Walken in the cast.

Reacher (February 4) l Fix Rating 7/10  – What if “Walker, Texas Ranger” contained brutally violent action sequences and the prevalence of the f-bomb? And what if the intimidating Jack Reacher were played by an actor consistent with the way Lee Child wrote him in the prolific book series? Well, Amazon answers both of those questions with a 6 foot 5 hero who breaks arms and heads with no regret.

Unlike the softer version of the character inhabited by Tom Cruise in two movies, this Reacher is played by the towering (at least, on camera) Alan Ritchson.  And in season one, he walks into the made-up town of Margrave, Georgia, only to become embroiled in a murder investigation with personal implications.

“Reacher” is wildly over-the-top and a little bit dated in its views of the South. If the “In the Heat of the Night” type elements fall flat, Ritchson makes up for it by keeping us entertained as his Reacher is a no-nonsense man of action. I’d expect this series, my new guilty pleasure, to get another season.

Death on the Nile (February 11) – Director and star Kenneth Branagh once again adapts an Agatha Christie classic with an all-star cast. Released during the pressured Academy Award campaign season (nominations are announced on February 8), one hopes that this outing is, at least, as engaging as Branagh’s last turn as detective Hercule Poirot in 2017. If “Nile” proves to be his “Norbit,” Oscar gold for his outstanding “Belfast” may be in jeopardy. Gal Gadot, Armie Hammer, and Letitia Wright have vital roles in this river-set, exotic murder mystery.

Uncharted (February 18) – Tom Holland and Mark Wahlberg star in this prequel adaptation of the best-selling video game. “Zombieland” director Ruben Fleischer tackles the material with Holland playing Drake and Wahlberg stepping in as mentor adventurer Sully. Antonio Banderas appears to be the heavy in this action extravaganza. Video game film adaptations have a rocky history; so, aside from the boost this movie gets from Spider-Man star Holland, the story has to be good for the film to overcome the video game curse.

The Music: Local & Live in February