The Film Fix: What’s In Theaters, Streaming in November 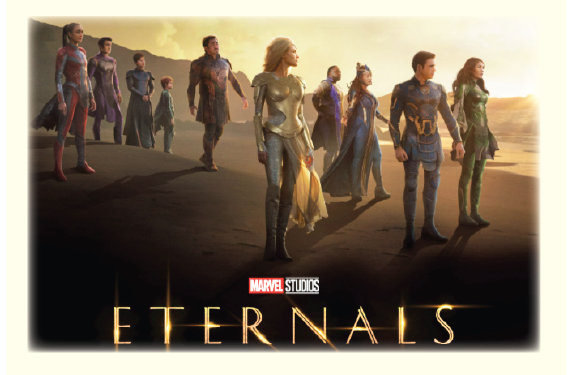 Once in the big city, she begins to see spirits that take her back to the swinging 1960s. In that timeline, Eloise inhabits the beautiful entertainer Sandie (Anya Taylor-Joy), whose life was a colorful combination of highs and crushing lows. Can Eloise unravel Sandie’s mystery and, in the modern present, bring murders to justice?

“Last Night in Soho” works well early as Wright sets up the two worlds.  But the concluding final act is a bit too chaotic and cliched to be completely satisfying.  The movie marks the final performance by the late Diana Rigg, who died last year.

The French Dispatch (Fix Rating 7/10) – Arguably a minor offering from directing auteur Wes Anderson, “The French Dispatch” is an anthology film. Some of the stories work better than others.  The carefully constructed production revolves around the French Dispatch Magazine featuring stories from its eclectic journalists. The publication’s owner, Arthur Howitzer, Jr. (Bill Murray), provides a fertile environment for writers to explore exciting and entertaining subjects.  The cast is deep, and every image in the movie contains Anderson’s trademark quirky touches.

The Beta Test (Fix Rating 7/10) – Writer, director, and star Jim Cummings (see “Thunder Road”) is on quite a roll.  In “The Beta Test,” he shares writing and directing duties with PJ McCabe, who also stars in the film.  The story has a high-profile, insecure Hollywood agent named Jordan (Cummings) experiencing cold feet leading up to his marriage to the devoted Caroline (Virginia Newcomb).  When Jordan gets a mysterious purple envelope in the mail beckoning him to engage in an anonymous sexual liaison, his decision sets in motion terrifying consequences.  “The Beta Test” is a provocative film that reflects our present social media, Internet famous landscape.

The Princess Switch 3: Romancing the Star (November 18) – Say what you want about this cheesy franchise, but Vanessa Hudgens has built a formidable “Princess” universe that shows no signs of slowing down.  This time around, three princesses try to find who stole a priceless relic. “Princess Switch 3” is one of many holiday films available on various streaming platforms.

Shang-Chi and the Legend of the Ten Rings (November 12) Fix Rating 7/10 – This successful theatrical release is now available to watch at home.  I liked the first half of this magical action saga primarily because the fight sequences contained fewer computer-generated effects.  The perfect pairing of Awkwafina and Simu Liu ensures future adventures featuring these two stars.

The Beatles: Get Back (Episode 1; November 25) – This documentary about the fab four is directed by Peter Jackson (“Lord of the Rings”). The film will cover 1969 through 1970 when the supergroup recorded their final studio album “Let it Be.”

King Richard (November 19) – Will Smith stars as Richard Williams, the father of tennis superstars Venus and Serena.  The story concerns the athlete’s formative years when Richard coached his daughters and never stopped believing that they could dominate the court.  We know he was absolutely right!

The Shrink Next Door (November 12) Fix Rating 7/10 – Will Farrell stars as Martin Markowitz, an introverted New Yorker who takes over his family’s curtain business after his father’s death.  After experiencing an awkward breakup, Martin visits a psychiatrist named Isaac (Paul Rudd), who convinces Martin to redo parts of his childhood to gain greater confidence.  Needless to say, things don’t go as planned.  In this amusing and insightful dramedy, the always delightful Kathryn Hahn stars as Martin’s overbearing sister, Phyllis.

The Electrical Life of Louis Wain: (November 5) – Benedict Cumberbatch plays 19th-century painter Louis Wain in this colorful biopic.  Wain is best known for his paintings of large-eyed cats and kittens.  But despite his artistic talent, he spent years in mental institutions and was believed to have suffered from schizophrenia. “The IT Crowd’s” Richard Ayoade is also in the cast.

Kurt Vonnegut: Unstuck in Time (Streaming Now) Fix Rating 8/10 – Filmmaker Robert B. Weide (see “Curb Your Enthusiasm”) ties together footage from his 25-year friendship with the famous author.  The film is a biography of Vonnegut and a personal story of Weide as he learns from the master writer.  It’s a moving portrait made even more engaging by Weide’s openness as he enters a later stage of his life without the reassuring presence of his good friend.  This documentary is a must for Vonnegut fans.

Ghostbusters: Afterlife (November 19) – Director Jason Reitman steps into his father’s shoes to effectively reboot the franchise that Ivan Reitman gave birth to in 1984.  The story has a single mother (Carrie Coon) and her two children (“Stranger Things” star Finn Wolfhard and Mckenna Grace) arriving in a small town where they discover the Ghostbusters car, the Ecto-1, in an old barn.  As they investigate, strange things start happening, and a new generation of Ghostbusters is needed.  Along with some returning cast members, Paul Rudd also stars.

The Music: Local and Live in November