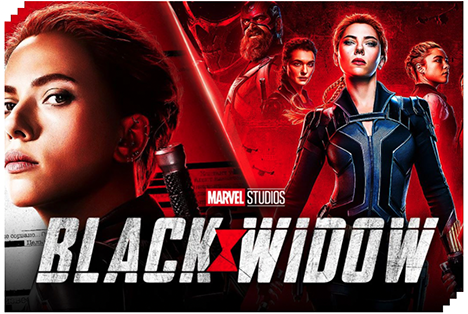 Venom: Let There Be Carnage (Fix Rating 7/10) – This sequel to the uneven 2018 surprise hit is gleefully bonkers in all the right ways. For “Carnage,” motion capture acting expert Andy Serkis (he played Gollum in “LOTR” and Caesar in the “Apes” films) takes over directing duties from Ruben Fleischer.  And what could have been a complete disaster turns out to be one of the year’s best guilty pleasures.

The story has struggling news reporter Eddie Brock (Tom Hardy) dealing with life as the host of a symbiote named Venom.  Once a menacing presence that originated in the Spider-Man comic in the 1980s, Venom separated from Spidey to become a dark anti-hero.  And when he’s attached to Brock, he shows us a little of his sensitive side.

But life with Venom crawling around in his body is daunting for Brock, whose professional career is on a downward slide.  Even his girl, Ann (Michelle Williams), has left him for a boring doctor.  Brock gets a big break when asked to interview a serial killer named Cletus Kasady (Woody Harrelson).  This interview sets in motion a wild sequence of events that usher in another symbiote that challenges Venom for dominance.

“Venom: Let There Be Carnage” is a crazed hour and a half that sets the stage for an inevitable pairing with Spider-Man.

The Guilty (October 1) – This is a remake of the 2018 Danish movie by the same name.  The film stars Jake Gyllenhaal as Joe Baylor, who operates a 911 dispatch desk.  When he gets an emergency call from a kidnapped woman, Joe must stay on the line and guide her and others to safety. The cast is impressive, with Ethan Hawke lending his considerable voice talents.  If the film is as good as the international movie that inspired it, expect tense moments.  “The Guilty” is directed by Antoine Fuqua (see “The Magnificent Seven,” “The Equalizer,” and “Training Day.”).

Black Widow: (October 6) Fix Rating 7/10 – Disney plus subscribers can now see “Black Widow” without having to pay for Premier Access. Scarlett Johansson returns to her MCU role as Natasha Romanoff, a Russian super-assassin.  In this standalone outing, we meet Natasha’s dysfunctional but superpowered family that includes her sister Yelena (Florence Pugh), awkward dad Alexei (“Stranger Things” star David Harbour), and scientist mom Melina (Rachel Weisz).  They work together to take down an insidious organization.  The setup is better than the by-the-numbers coaster ride conclusion. But the fun of the tilted family dynamic is worth the price of admission.

Muppets Haunted Mansion (October 8) – The Muppets return with this special starring Gonzo (voice of Dave Goelz), who must spend one night in a haunted house.  The late Ed Asner also lends his voice talents to this puppet affair.

The Many Saints of Newark: (Now Streaming) Fix Rating 7/10 – A must for fans of “The Sopranos,” this Tony Soprano origin story will also work for non-fans who like a good mobster yarn.  The late James Gandolfini’s son, Michael, plays a younger version of Tony, the character that his father made into a television icon.

Dune (October 22) – The Warner Bros. gamble to release blockbusters in theaters and on streaming will see its biggest test when “Dune” becomes available on October 22. The film is being touted as a visual treat that begs to be seen in theaters.  But will audiences pay to see something that they can enjoy on their big screens at home?  This new adaptation of Frank Herbert’s 1965 classic stars Timothée Chalamet as the hero Paul Atreides.  The cast around him is deep with Oscar Isaac, Jason Momoa, Josh Brolin, Javier Bardem, Dave Bautista, and Zendaya. “Dune” is  directed by Denis Villeneuve, who last gave us “Blade Runner 2049.”

Foundation (Now Streaming) Fix Rating 7/10 – While HBO Max gives viewers classic science fiction, Apple is doing something similar with their serialization of the 1942 Isaac Asimov novel “Foundation.” This series follows a genetic empire that rules humans scattered throughout the galaxy.  Visually striking, the show takes its time with character development and world-building, but it is solid intellectual and action-packed entertainment once it gets going.

Welcome to the Blumhouse: (July 2) – The anthology film series returns with four new spine tinglers during this Halloween month. On October 1, we get “Bingo Hell” and “Black as Night.”   On October 8, “Madres” and “The Manor” are released.

“Bingo Hell” has a group of old folks taking on demonic forces that infest their, you guessed it, bingo parlor. “Black as Night” is a teen vampire story set in New Orleans. “Madres” is set in 1970s California and revolves around a Mexican-American couple expecting their first child while dealing with a legendary curse. And possibly the most intriguing of the foursome is “The Manor,” starring Barbara Hershey as Judith, a woman who suffers a stroke and is sent to a nursing home.  When she discovers that something supernatural may be preying on the residents, no one believes her because, after all, she has dementia.

The Gateway: (Streaming Now) Fix Rating 6/10 – Director Michele Civetta does a lot with a little in his 1970s inspired crime thriller “The Gateway.”  This little film is elevated by an engaging performance by Shea Whigham, who plays a boozing social worker named Parker.

When Dahlia (Olivia Munn), the mother of one of the children he’s watching over, is threatened by the criminal activity of her boyfriend, Parker decides to intervene.  Naturally, that puts everyone in harm’s way.  But with the assistance of his musician father (a horn-playing Bruce Dern), the ultimate showdown will end with bodies stacked high.

Primarily of interest for the cast, including Frank Grillo, Taryn Manning, and Mark Boone Junior, “The Gateway” is effective b-movie entertainment.

Halloween Kills (October 15) – This follow-up to the 2018 reboot of the “Halloween” series will be released in theaters and on the Peacock streaming platform.  Director David Gordon Green returns, as does Jamie Lee Curtis and the surviving members of Laurie Strode’s family, for one more attempt to rid the world of Michael Myers. While advanced reviews haven’t been kind, I’m up for another round with the masked killer.  The cast includes Anthony Michael Hall as Tommy Doyle, a recurring character in the “Halloween” universe played by Paul Rudd and others in previous outings.

The Music: Local & Live in October