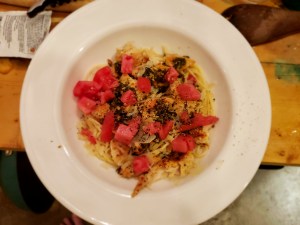 When the Little Black Dress and I were first married, we lived in Washington, D.C. in a narrow little brownstone four blocks from the Capitol.

The “backyard” was roughly 12 by 15 feet of old bricks that had settled down so it was pretty uneven. But there was a strip of dirt along one side of the fence, roughly a foot wide. And it was there that we planted some basil plants.

For some reason those little plants thrived. To the point they became bushes and probably are trees by this point. We moved before they got that tall.

So we learned to make lots of things with basil, the primary item being pesto.

You grill some chicken, cook some pasta and make a pesto sauce. That’s it in a nutshell. And yes, you can use store-bought pesto in a pinch. We just add a little butter and parmesan to the pesto in a saucepan and heat until the butter is melted.

Uncooked chicken, thighs, tenders, breasts whatever you want and enough to feed how many you are cooking for.

Cut the chicken up into bite-sized pieces. Throw it in a large mixing bowl and add the seasoning, garlic and olive oil to your liking. If you don’t like garlic, don’t add it. Grill the chicken the way you like, set aside.

A good handful or two of basil leaves

Throw all of the above into a food processor or blender and mix until smooth.

Grab a bowl, put pasta in first. Then add chicken and finally pesto. Caution – a little bit of pesto goes a long way. Don’t treat it like spaghetti sauce. Garnish with fresh parmesan and sliced tomatoes.