The History: Coweta’s most famous politician was Democrat Ellis Arnall 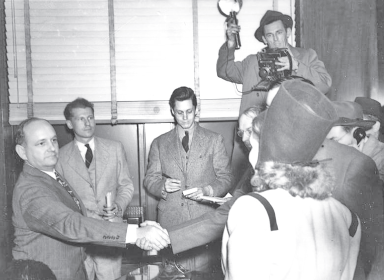 The cool air of November ushers in a season of pumpkin spice, sweaters, falling leaves, and … politics.

While most people do love the beginning of the fall season and colder weather, the political season is not typically as welcome. Particularly with a hotly debated and controversial Presidential election this year, November and Election Day bring about feelings of stress and anxiety for many.

Coweta County is proud of its politics and for a smaller county, Coweta remains fairly politically active. With a population size of approximately 141,554, there are 107,000 individuals registered to vote. Though the county represents individuals from all backgrounds and political sides and beliefs, the county is known for being fairly conservative. In 2016, Donald Trump won 68.38% of the Presidential votes in the county, and in 2018, Brian Kemp won Coweta County with 69.69% of the votes.

Considering Coweta’s voting history, it is interesting to note that arguably the most famous politician from Coweta County was actually Democrat Ellis Arnall. Ellis Arnall served as the governor of Georgia from 1943 to 1947 and is considered one of the most progressive and effective governors in the modern history of the state.

Ellis Gibbs Arnall was born on March 20, 1907 in Newnan. After graduating with a Greek degree from the University of the South in Sewanee, Tennessee and a law degree from the University of Georgia, he returned to Newnan in 1931 to practice law. In 1932, Arnall began his political career when the voters of Coweta County elected him to the Georgia House of Representatives at the age of twenty-five. While serving as a Representative, he was twice elected to the position of Speaker pro tempore, and at the age of thirty-one was named by Governor E.D. Rivers as the state attorney. In 1942, Arnall ran against incumbent Governor Eugene Talmadge and was elected the youngest governor in the nation at the age of thirty-five. Unfortunately, Arnall’s political career declined nearly as quickly as it began. He lost much of his popularity due his stance on allowing Black Americans to vote in state primaries. After losing the popular vote and failing to persuade legislators to amend the state constitution to allow for his gubernatorial succession, Arnall’s tenure as governor ended in 1947.

Arnall spent the rest of his career as an attorney and businesman in Atlanta and served in President Harry S. Truman’s administration. Arnall ran again for governor in 1966 but lost to Lester Maddox. He never sought public office again. In 1992, Ellis Arnall died at the age of eighty-five. The legacy of Ellis Arnall is now memorialized with a statue standing outside the Georgia State Capital and a Historical Marker in Downtown Newnan.

The Newnan-Coweta Historical Society and McRitchie-Hollis Museum maintains a small collection of Ellis Arnall material including scrapbooks and a China Set. If you are interested in seeing part of the collection, please contact NCHS at 770.251.0207.