When Local History Gets Destroyed 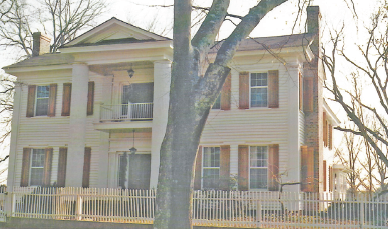 Fortunately, for Coweta County – due to its physical location and its role in the war as a hospital town – the area was spared during the March, resulting in the area still possessing many of its Antebellum homes. Coweta survived the worst, which makes the loss or potential loss of a historical home particularly devastating.

The Leavell/Page home on Hwy 16 in Turin, Georgia, was built in 1832/1833 by Richard Leavell – one of Turin’s original settlers. After his death, Leavell willed the house to his stepson, Dr. George H. Page. Dr. Page was well-known for his caring demeanor and medical skills and it was his actions that made the house historically renowned.

In 1863, Dr. Page, though on the Confederate side of the war, treated two Union soldiers at this home. The two Union soldiers – A.O.Sloan and JT Linder – are now buried at Tranquil Cemetery in Coweta County. Tradition gives many reasons for Dr. Page treating these soldiers. Some believe his duty to his medical calling spurred his action, while others think it was his association with the Masons, as the Union soldiers were also affiliated with the brotherhood.

Regardless, Dr. Page was respected and beloved for his actions. A tribute published in the Coweta County Chronicles states of Page: “He was a noble man – a gentleman in every way. His character was spotless, his truth unquestionable, and his Christian walk in life without a fault.”

Since Dr. Page lived in the home, other influential Turin residents have resided there, including A.O. Walton and Dr. Enrico Carrasco. Now, the house and its surrounding acreage are in negotiations to be sold to a developer who plans on tearing it down to build a 65-house subdivision. Descendants of Dr. Page are working to save the building, whether by finding a new buyer, getting city intervention, or moving the home to another location.

Historic buildings can be saved, and the Page family has initiated the first important step: awareness. However, saving historic buildings takes time and resources that require a community’s ongoing support.

One way you can help save these historic buildings is by supporting your local historical societies. Historical societies around the county, including the Newnan-Coweta Historical Society, the Senoia Area Historical Society, and the Coweta County African American Heritage Museum, are here to help with these projects, but we need your help too. We need resources to write grants, call organizations, and take on projects, all while maintaining our own buildings and programs.

If we want to preserve our history, we have to do it together!

Photo Credit: Courtesy of You Grew Up in Turin if Facebook Page

Newnan-native Emily Kimbell is the director of the Newnan-Coweta Historical Society and McRitchie-Hollis Museum. Emily is currently finishing her doctoral studies at Georgia State University where she also teaching English Composition courses and is an active member of her community often seen on stage in local theatre productions and writing for local media outlets.