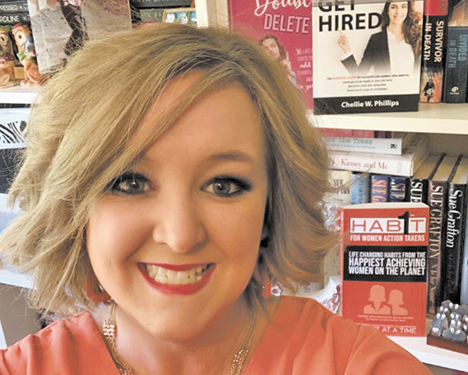 This month, The Paper publishes its Q&A with Chellie Phillips.

Briefly describe yourself and what you do.

I’m a sweet tea sippin’ Southern girl from Alabama who loves her SEC football, especially the Crimson Tide. I’ve also got a lot of love for my former hometown Troy Trojans as well.  I think I grew up knowing I wanted to write. I went to college knowing I wanted a degree in journalism and began working at a small weekly paper. Later, I became a features editor at a daily one. I’m a born question asker. I think everyone has a story worth telling if you dig deep enough.

I left newspapers and moved into the world of public relations. That’s how I started working with electric cooperatives. About four years ago, I moved to Georgia to begin working at Coweta-Fayette EMC as their VP of Communications and Public Relations. I’m the author of two books – When In Doubt, Delete It! and Get Noticed, Get Hired. My happy place is anywhere the waves are rolling in, the sun is shining, and my toes are in the sand.

Don’t save the good china for special occasions. There’s something to celebrate in every day and you aren’t promised tomorrow.

Trust my gut and be quicker to decide the right choice is to move on.

Solo trip – What 3 albums and 3 books would you take.

It might be cheating but….. The alphabet murder mystery series by Sue Grafton is a favorite (I’d bring one of the compilation editions)

I was a radio news broadcaster for a few months at a top 40 station WXMK-FM. I didn’t like the 3:30 AM wake up required for the morning news shift.

Dinner party for 6 – what 5 guests -in no particular order.

Write my murder mystery – KING FISH (yes I have a title) -and have it end up an Amazon best seller. I’ve been working on this story in my head. It’s set in a sleepy little beach town similar to Apalachicola. The heroine is the small-town newspaper reporter who won’t stop digging until she finds the truth. Oh and there might even be a little paranormal activity to deal with too. I’ve never written fiction of this length, but it will happen sooner or later.

If you weren’t doing what you are now, you would be …

I’ve built online courses and training sessions based on my books. If I didn’t love my day job, I’d spend all my time growing and promoting those. I’m passionate about helping people learn to communicate their worth and succeed professionally. I’d really dive into my coaching practice and find more speaking opportunities too.

Burger with cheese and crispy hand cut fries that still have a little skin on them.

It’s not just one – I’m’ a huge James Bond Fan. I love the marathons when they run them. Roger Moore and Daniel Craig are my two favorite Bonds.

This is tough.  I couldn’t narrow it down to one.

“There’s no passion to be found in playing small – in settling for a life that is less than the one you are capable of living.” – Nelson Mandela

“Start by doing what’s necessary; then do what’s possible; and suddenly you’re doing the impossible.” – Francis of Assisi

Name something you’re glad you did or accomplished.

In 2015, I completed a half-marathon – The Rock-N-Roll ½ in Nashville. Do you know how many hills there are in Nashville? It’s a total lie if something goes up, it must come down. Not there. You just climb and climb.

Before that race, the most I’d ever done was a charity 5K which I walked most of. I’m not an athlete or runner. I did it to prove to myself I could.  Now that story has become something I can share and encourage others to turn off the negative voices inside their head. It really is amazing how we talk to ourselves and the power those thoughts have over our actions. If you want to do something, do it. Yes, it will take effort. There will be ups and downs. But, if you put one foot in front of the other on a consistent basis, you’ll end up at the finish line.

Advice you’d give your younger self just starting out on their own.

Don’t wait for the perfect time. There’s no such thing. And, be careful who you surround yourself with and let in your circle. Fill that circle with people who are truth tellers, and who inspire, encourage and believe in you.

The Journey: Understanding the next phase after ...

Notes From Jackson Street: A letter to ...