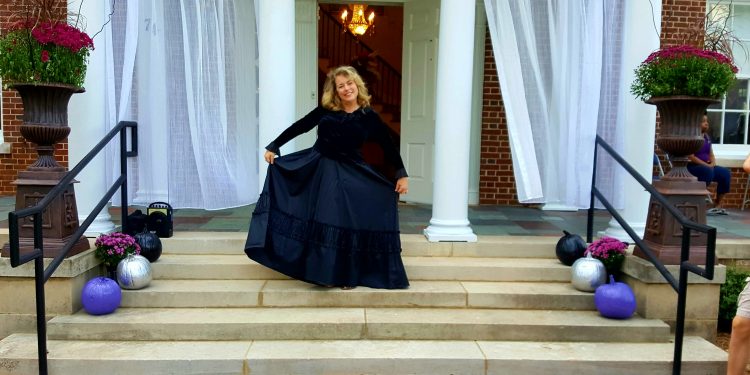 Born in Savannah to a family of readers, travelers, writers, creatives and dreamers, a lifelong Georgian who’s lived in Statesboro, Camilla, Athens and Atlanta/Decatur, I’ve called Newnan home for 20 years. I’ve worked in Atlanta advertising and as librarian at Woodward Academy. Currently I am a self-employed events director, writer and property manager. I’m mama to one awe-inspiring daughter at Young Harris College. My husband is Newnan’s funniest, handsomest man, Michael Scott. Together we try to keep up a 170 yr old house. I’m in the Council of the Blue Gnome which includes myself plus four smart, funny, wonderful women who help me GET THROUGH IT ALL! Love life in Newnan, our little (big) town — the history, peanut butter cookies at Redneck, Mr. Personality, the new trolley, the clothes at Blue Moon, Chad Smith’s accent, Horace & Mike at the Post Office, the sound of the train whistle and courthouse clock, the iced tea at Sprayberry’s, the wail of Doug Kees’ guitar, Miss Elizabeth Beers’ zest, David Boyd Sr.’s cartoon portraits, snagging a hug from Mr. Jimmy while out for a walk, seeing what fashionista Emily Westergreen will wear next, our beautiful parks and churches, the Wadsworth and more!

Never stop growing and learning. Constantly be adding something new to your bag of tricks.

I would be less fearful. Terrible things are going to happen, but they are not usually the things you think, so why worry? Just live and don’t worry about the 800 lb. bear you can’t see running your way!

I’ll start with “Bridge Over Troubled Water” by Simon and Garfunkel. As my father played it on the turntable I stood in my crib listening, mesmerized. No. 2, “Beatles ’65”, my older brother gave me for Christmas when I was five and I thought, “Boy, this is IT! The ultimate happy, cool, fun!” I proceeded to play it continuously until it horribly warped. Bob Dylan is my favorite song writer, but the “The Last Waltz” by his former backing group, “The Band” takes No. 3. Books — No. 1 “How to Think Like Leonardo da Vinci: Seven Steps to Genius Every Day“ by Michael J. Gelb. The inside flap reads “Genius is made, not born. And human beings are gifted with an almost unlimited potential for learning and creativity. Now you can uncover your own hidden abilities, sharpen your senses, and liberate your unique intelligence by following the example of the greatest genius of all time, Leonardo da Vinci.” “Catcher in the Rye” by J.D. Salinger because he captures so well being angst-filled on the cusp of adulthood. Next, the dreamlike “Other Voices Other Rooms” by Truman Capote. He illustrates the vaporous southern Gothic experience of which we southerners know so well. One more — “From Southern Wrongs to Civil Rights” by Sara Mitchell Parsons (my grandma) is fantastic! On a first name basis with Dr. King, the book chronicles her experiences as a white Civil Rights worker.

Growing up I was a tom boy with a capital “T”. Had a BB gun, a dog, a bike, a tree house and I was happy! Like Opie Taylor, I was a free-range chicken. I would drop in my dad’s office, stop by the drug store for a Coke, decide maybe it’s a good day for a swim and cruise on over to the pool. Raining? Time to head to the library. Once a teenager I fashioned myself one of the “Go-Gos” with make-up, bright colors and had a huge platinum blonde-80s style mullet. [Sigh]

You are hosting a dinner party for six. What five people, living or dead, would you invite and why

They say emulation is the highest form of flattery. I take (some would say steal) what I admire from others. Learning from people I admire is something I like to do, so to have dinner with some of my lifelong heroes would be Ah-MAZING and I could lift a few pointers. The guest list would look something like this —
Mark Twain or Oscar Wilde to teach me how to endlessly come up with clever things to say. Mahatma Gandhi, MLK Jr. or Nelson Mandela to teach me how to fight peacefully and with integrity. Eleanor Roosevelt or Mother Teresa to teach me how to serve selflessly. Shakespeare or Bob Dylan to teach me how to write brilliantly. Ben Franklin or Leonardo DaVinci to teach me how to be doggedly curious.

Name an as yet unfulfilled dream

To be able to dance really well. I love shag and jitterbug dancing. My husband Michael is really good dancer, but we haven’t had time to practice together much. We are signing up for lessons soon.

If you weren’t doing what you are, you would be …
A BIG TIME show and events producer. I’ve enjoyed some success with helping events and shows be more engaging, fun and organized. Would love an opportunity to try that out on a larger platform. After shows and events some say, “you should be doing bigger things in L.A. or New York.” Also, I’d love to be an artist drawing and painting portraits of old rock stars, jazz and blues artists.

Fruit salad. Yummy. Yummy. There’s an infectious song I sing about it by The Wiggles. Google it!

How about some films that are delightful but not on everyone else’s list? I prefer movies with realistic characters having realistic dialogue with a nod toward something outlandishly zany. I don’t do violence or depressing. A fan of Sci-Fi I am not. Having said that, I’ll start with the lighthearted “Harvey” with James Stewart. Elwood, played by Stewart, has a bit of drinking problem and starts engaging with a giant invisible rabbit named Harvey. Just when others start to think he’s gone crazy, to their surprise, they themselves start having interactions with Harvey. “The Secret Life of Walter Mitty” starring Danny Kaye tickles my funny bone. His slapstick physical humor is HILL-LARRY-US. Also, “What’s Up Doc?” starring Barbara Streisand and Ryan O’Neal. The scene where they are trapped inside a Chinese Dragon Head rolling through the streets of San Francisco astride an ice cream cart — OMG, LOL FUNNY.! Woody Allen’s “Sleeper” is another hoot n’ a holler. “Sunset Boulevard” definitely a fave. When William Holden stumbles into the old movie star’s (Gloria Swanson) mansion and she thinks he’s the undertaker for her dead pet monkey, I was hooked. “Wild Man From Borneo” — this original Little Rascals sketch is crazy FUN. Run Spanky run!

Both. But I’m giving the edge to the dogs because of the litter box factor which is just sort of a deal killer for me with cats. Sorry kitties! I still love you!

“Don’t be surprised by adversity. Expect it.” – Muhammad Ali. This changed my thinking. As a young person I may have been a bit naive about the motives of others. There are people out there, we’ll call them “dream crushers” (maybe they are the same as the Death Eaters in Harry Potter), who obviously get a thrill out of trying to make other people as miserable as they. Their favorite word: “NO.” They are afraid someone may throw a little color into their gray cardboard cookie-cutter world. They will try to block dreams, happiness, fun, love. Just step around these folks!

The Library Science master’s degree was a challenge, but I did it! Also going through a tedious adoption process which included living in Kazakhstan for a month seemed like the equivalent of climbing Mount Everest, but my daughter was way worth it. All of the shows, events and creative projects I’ve done. And finally, getting our house on Temple Avenue decorated for the Tour of Homes. I was the lion in the Wizard of Oz, cowardly and afraid, but the tour director persisted, “Larisa, I believe in you. You’ve got this.” I forged ahead and we put up SEVEN Christmas trees — one of them was made of books! The tour was on December 7, so the rest of the season we sat back (exhausted) and enjoyed it all.

What advice would you give your younger self just starting out on your own.

I would take the advice from “The Four Agreements, A Toltec Wisdom Book” by Don Miguel Ruiz, which is, be impeccable with your word, don’t take anything personally, don’t make assumptions and always do your best. Also, DRINK YOUR OVALTINE!!
TagsLarisa Mitchell Scott

The View From The Loft: A Presidential ...