The View from the Pines: Relating to Judge Judy 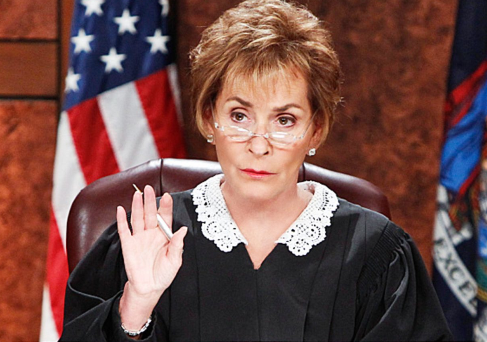 Since the pandemic began, I’ve been forced to find ways to entertain myself and since I think most television programming is an insult to an average person’s intelligence, I’ve defaulted to HGTV, the Food Network and Judge Judy videos on YouTube.

Of these three, the one I most closely relate to is Judge Judy.  In the interest of full disclosure, I’ll admit that I did try to remodel a house in five days with $50,000 and that failed miserably.

First of all, Judge Judy is the quintessential New Yorker.  I know that doesn’t appeal to a lot of people, but having spent a great deal of time in New York City over my lifetime I find it refreshing.  I’ve heard Southerners say that New Yorkers are rude.  To the contrary, I find them honest, upfront, to the point and possessed of the ability to efficiently use the language and their time.

In the South, if you ask a coworker if they’d like to come over after work for a drink they will respond,  “Well I’d love to but my aunt’s in the nursing home and I need to run by there, if everything is good then I’ll call you.”  Ask a New Yorker that question and the answer is “no.”  Southerners dance around each other, which can be charming but it’s not very efficient.  If the answer is “no” just say “no.”  “No thank you” also works.

I don’t know about you, but I find that the Honorable Judge says to people what I’m thinking but I don’t usually say.  How many times have you ever wanted to bang a gavel on the table and say “I’M SPEAKING?”  I find it amusing how many people will subject themselves to having their stupidity exposed to 10 million people on television in exchange for the glamorous experience of flying in coach to California and spending the night at the Fairfield Inn with the free breakfast just to be on television.

Review this list of Judge Judy quips and just try to imagine a time in your life when you really wish you could have said one of these.  For the sake of civility, you refrained from saying any of this, but admit it, you thought it.

“If you eat the steak, you have to pay for it.”

“So now everybody knows that you are just as dumb as he is.”

“Why would you think that?  What undiscovered planet are you from?”

“The only thing you’re good at is making babies.”

I’m reminded of the time when I was still flying when I politely informed a lady from New York that her bag would not fit in the overhead bin to which she responded, “If you weren’t so #&$*#&@ late, I’d have more than 20 minutes to make my connection in Atlanta.” In perfect Judge Judy style, I politely responded, with a smile “Well, that doesn’t make your bag smaller.”

It’s all in the delivery, folks.