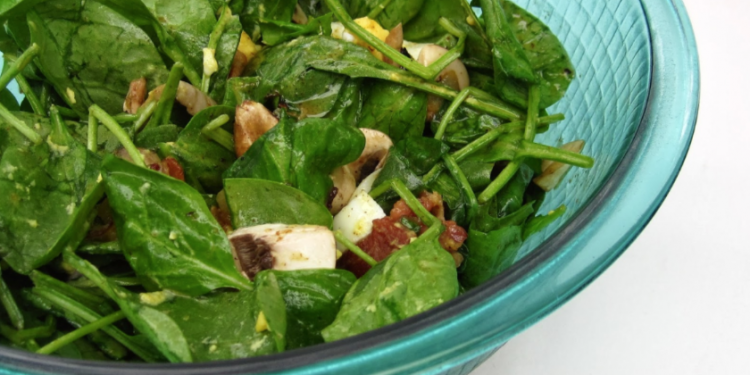 By Angela McRae, Special to The Shopper

One of the things I most enjoy about meals in the summertime is that a lot of them are meatless. While I like meat, I certainly don’t have to eat it every day, and when I first read about treating meat as a “garnish” at meals instead of the main attraction, that idea very much appealed to me.

In the summer, when I can practically live off grilled or roasted vegetables and tomato sandwiches, a salad with a little meat as a topping is a nice treat, especially for the evening meal. I’ve made salads topped with salmon, with chicken, and with shrimp, and if you happen to have a few slices of bacon in the fridge, I recommend you use them in this Wilted Spinach Salad.

Spinach has long been one of my favorite salad greens. When visiting a salad bar, I always go for the spinach first. It’s good fresh, it’s good boiled, it’s good mixed with other greens, it’s good when used as an ingredient in creamy dips, and honestly, there’s just not much that a handful of spinach won’t improve. These days, thanks to those handy bags of greens so readily available at the grocery store, we have it super easy and can have a spinach-packed meal on the table in no time.

I still like spinach, and if you do, too, I think you’ll enjoy this salad, a recipe that was originally served at Younkers Department Store in Iowa. The dressing is simple to make, and the hot dressing over the wilted spinach leaves makes this salad a delicacy that Popeye could have only dreamed of.

Toss spinach and mushrooms in a large bowl. In a skillet, cook bacon over medium heat for about 3 minutes, then add onions and cook until they are translucent and the bacon is crisp. Drain and reserve 3 tablespoons of the bacon drippings in the skillet. Add mustard, brown sugar, white wine and vinegar and bring to a boil. Reduce heat and let simmer for 5 minutes. Remove from heat and cool slightly. Pour dressing over salad and toss to combine. Add eggs, toss and serve immediately. Yields 6 servings.