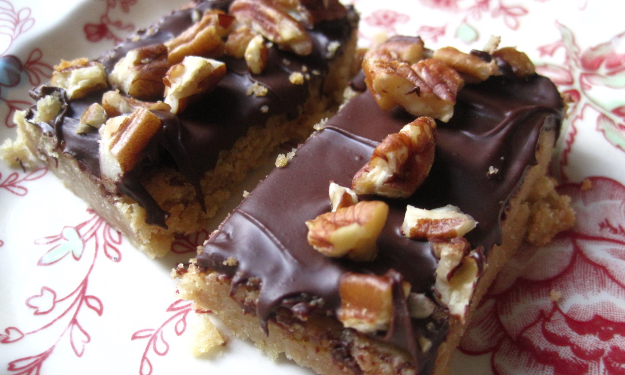 When Southern cooking queen Paula Deen first began to get a lot of press years ago, I loved how it was often reported that her favorite food was butter. Of course, Paula went on to lose a lot of weight and began to focus on making her recipes healthier, but she still uses butter today, just in moderation.

The English like their butter too, and food historians tell us that toffee originated in England partly because of the bountiful butter supplies there. When I looked in Merriam-Webster, I found that the word “toffee” dates to 1825, and I marvel that this yummy confection wasn’t invented long before then.

Each February, after the Christmas baking is long over and I’ve had a January filled with more virtuous eating habits, I like to bake a few sweet treats, and a delicious and easy one to try is these soft toffee bars.

One reason I like baking treats around Valentine’s Day is that it gives you a good chance to get rid of any lingering guilt you may have about who didn’t (but should have) gotten Christmas treats from you. Nobody expects a gift from you in February. So if you make a treat for a neighbor, friend, or family member around Valentine’s Day, the gift will be unexpected and thoroughly appreciated.

I’ve made a number of toffee treats over the years, but this is a recipe I found online and tweaked to my liking. I do suggest cutting the toffee into small bars, though, and savoring them with a cup of hot coffee or tea. Portion size is so important, and as I heard a svelte style blogger say recently, “Enjoy dessert in moderation, but remember that the second half tastes exactly like the first.”

I like to cut my toffee into bars while the chocolate is still a bit wet, as I prefer seeing the little drippy chocolate swirls instead of a straight edge, but perhaps I’m a bit obsessed with my toffee texture. However you choose to slice and dice these delightful buttery treats, enjoy, and Happy Valentine’s Day!

Heat oven to 350 degrees. In a large bowl, combine butter, brown sugar, vanilla, and egg yolk. Add flour and salt. Press crust mixture into an ungreased 13 x 9 x 2-inch pan. Bake for 25 to 30 minutes or until crust is light brown. Remove from oven and immediately sprinkle the semisweet chocolate chips across the hot crust. Let rest for about 5 minutes or until chocolate has softened and can easily be spread over the crust. Sprinkle with pecans.

Let toffee cool for 30 minutes in the pan, then cut into bars of desired size. Small rectangular “fingers” are good for sharing-sized portions.