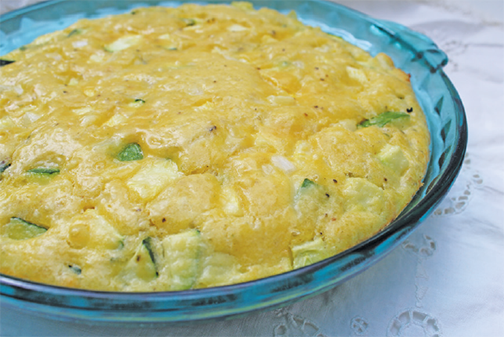 By ANGELA McRAE, Special to The Weekly

Can we just talk about the wonders of Pyrex for a minute? I never paid attention to my family’s cookware when I was growing up, but when I got out of school and got an apartment, my roommate was a fan of the fashionable new brown Pyrex wares.

Later, when I got a place of my own, I began to buy all the basic cookware in clear Pyrex: bowls, measuring cups, and various sizes of baking pans.

But 10 years or so ago, I was antiquing near Orange Beach one day when I saw one of the prettiest pieces of Pyrex I’d ever laid eyes on—a basket-weave-patterned bowl in a glorious teal color I’ve since learned is called “Peacock.” The color was introduced in 2002, so it’s not vintage, it’s just not readily available anymore. That $6 find quickly became a favorite, and I began stalking eBay for its mates. I found another mixing bowl and a square baking pan (the official “brownie pan” at my house), but for years, I had longed for a pie plate. Several times, I came close to buying one on eBay, but I always got outbid, as I am way too thrifty to pay “collector” prices for things I do not absolutely have to have.

A few months ago, however, I checked my email and got an eBay alert that a Peacock Pyrex pie plate had just been listed. It was in my price range, so I immediately clicked the “Buy It Now” button, but someone else was stalking it as well and beat me to it. Bummer. The dust settled on that auction, then one day, multiple Peacock pie plates appeared. The prices were right, and one was soon headed to my house.

When my sister gave me some zucchini from her garden recently, I started digging through my boxes of vintage handwritten recipes to see if anyone had perchance included a recipe for zucchini bread. While I didn’t find that recipe, I did find an intriguing handwritten recipe titled Zucchini Pie. I was eager to bake the recipe in my new(ish) pie plate, and I discovered a new way to enjoy zucchini. The texture reminds me of those Bisquick chicken pot pies I’ve had before, and it was perfect for the light summer suppers I enjoy.

Add a dollop of sour cream on top and a slice of tomato and call dinner done.

Preheat oven to 350 degrees. Pour all ingredients into a medium-size bowl and combine well. Pour mixture into a 9-inch pie plate prepared with cooking spray and bake for 25-30 minutes or until a knife inserted in the center comes out clean. Allow to set for a few minutes before serving.