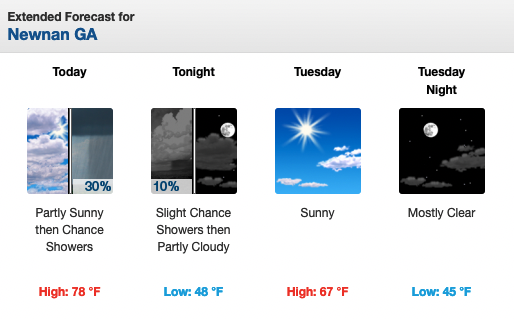 The days of afternoon high temperatures in the 80s appear to be in the rearview mirror as Coweta County enters into the work week.

Today’s high is forecast to be near 78 degrees and will likely be the warmest temperature for a while, says the National Weather Service in Peachtree City. Highs the remainder of the week are 67 on Tuesday, 71 on Wednesday, 66 on Thursday and 57 Friday.

A cold front moves through later today bringing with it a slight chance (30%) of isolated showers and a possible thunderstorm. Winds will start from the Southwest at 5-10 mph with gusts to 20. Once the front passes, the wind will be from the Northwest at 5-10, gusting to 15.

Another front enters the area late Wednesday, early Thursday and will bring an 80 percent rain chance on Thursday and 60 percent Thursday night.

MONDAY – A slight chance of showers between 1pm and 3pm, then a chance of showers and thunderstorms after 3pm. Partly sunny, with a high near 78. Light and variable wind becoming southwest 5 to 10 mph in the morning. Winds could gust as high as 20 mph. Chance of precipitation is 30%.

TUESDAY NIGHT – Mostly clear, with a low around 45. North wind around 5 mph.

WEDNESDAY – Mostly sunny, with a high near 71. North wind around 5 mph becoming southeast in the afternoon.

THURSDAY – Showers and possibly a thunderstorm. High near 66. Chance of precipitation is 80%.

FRIDAY – A 40 percent chance of showers, mainly after 2pm. Partly sunny, with a high near 57.

SATURDAY – A 20 percent chance of showers. Mostly cloudy, with a high near 58.

The Coweta County extended forecast from the National Weather Service in Peachtree City.