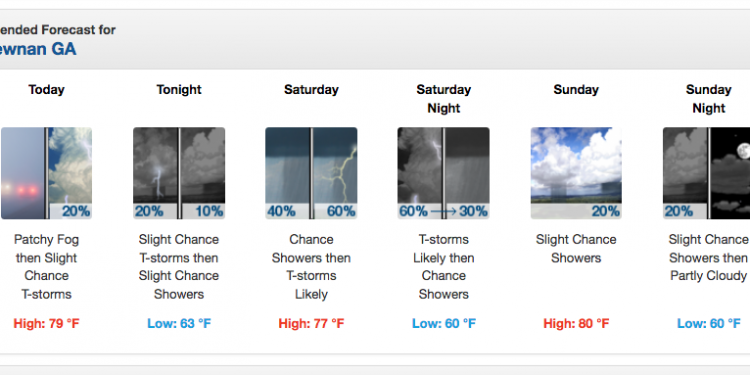 After a pleasant week with mostly sunny skies and highs near 80, the weekend forecast for Coweta County will change according to the National Weather Service in Peachtree City.

Beginning today (Friday), clouds increase with a slight chance (20%) of rain in the afternoon. The high will be near 79 degrees today and overnight low 63.

Saturday afternoon and evening is when rain chances increase to 60 percent. Folks can expect showers but a thunderstorm is possible. The high will be 77 with an overnight low of 60.

And on Sunday, look for mostly sunny skies to return with a high near 80 degrees with rain chances listed at 20 percent.

Below is the day-by-day official forecast (subject to change) from the NWS:

SATURDAY NIGHT – Showers and thunderstorms likely, mainly before 9pm. Mostly cloudy, with a low around 60. Calm wind. Chance of precipitation is 60%.

SUNDAY – A 20 percent chance of showers after 9am. Mostly sunny, with a high near 80. Calm wind.

SUNDAY NIGHT – A 20 percent chance of showers before 9pm. Partly cloudy, with a low around 60.

The Coweta County Weekend Forecast from the National Weather Service.