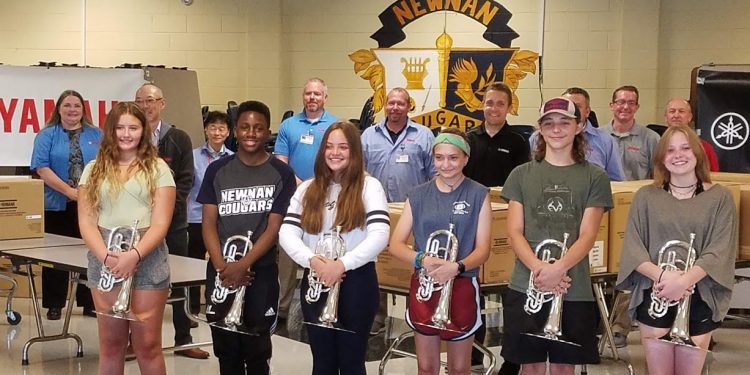 According to Dr. Joshua Boyd, Director of Bands, it was devastating for the marching band, “It pretty much leveled our building. It was deemed a total loss. We lost everything: every instrument, every uniform, every piece of the band’s history.” 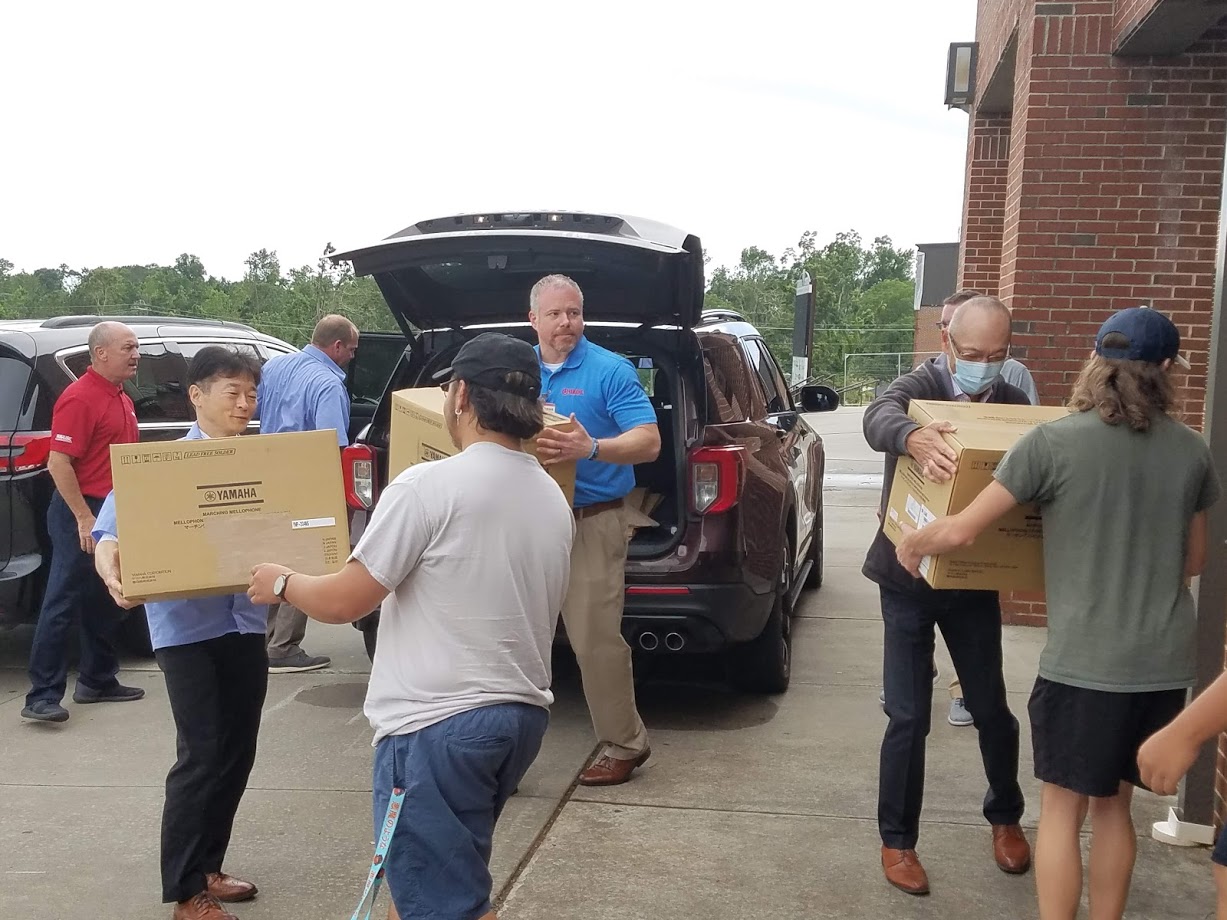 “When we finally got in there, the roof had shifted, water had poured in for three weeks. Our woodwind instruments were literally sitting in water, rotting. It looked like someone had gotten in there and just thrown instruments against the side of the walls.”

Dr. Boyd said  his students stepped in to help their fellow bandmates and the community who had lost their homes in the storm. He said he put word out to the band requesting volunteers and 30 kids showed up. Three days later, they requested help again and all 130 of their kids showed up to clear debris. 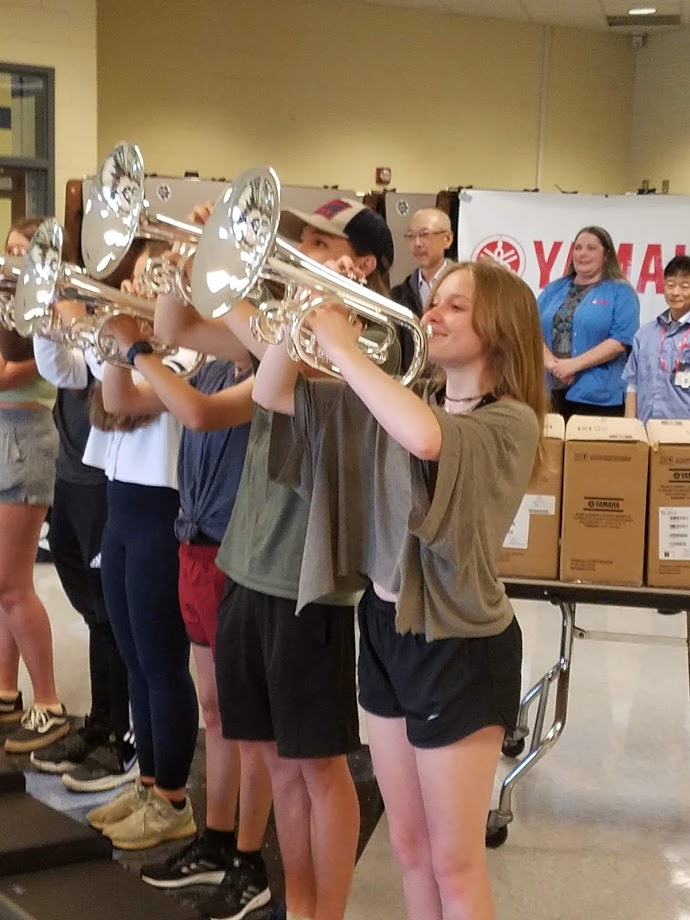 One student who had been impacted by the tornado asked Dr. Boyd whether there would be a band in the fall, and he had to answer, “I don’t know.” And the student told him, “I need you to know that I need this. Because this is all I have. I don’t have a house. I don’t have any stuff, but this is what I have.”

Yamaha Motor Manufacturing Corporation, a hometown business in Newnan, doesn’t make instruments—they assemble recreational vehicles like WaveRunners, Side-by-Sides, ATVs and golf carts. The local leadership at the Newnan assembly plant heard about the issues with instruments and thought that they could help by connecting Newnan High School’s band to their music division, Yamaha Corporation of America, based in Southern California, within close proximity to Yamaha Motor’s Corporate Headquarters. 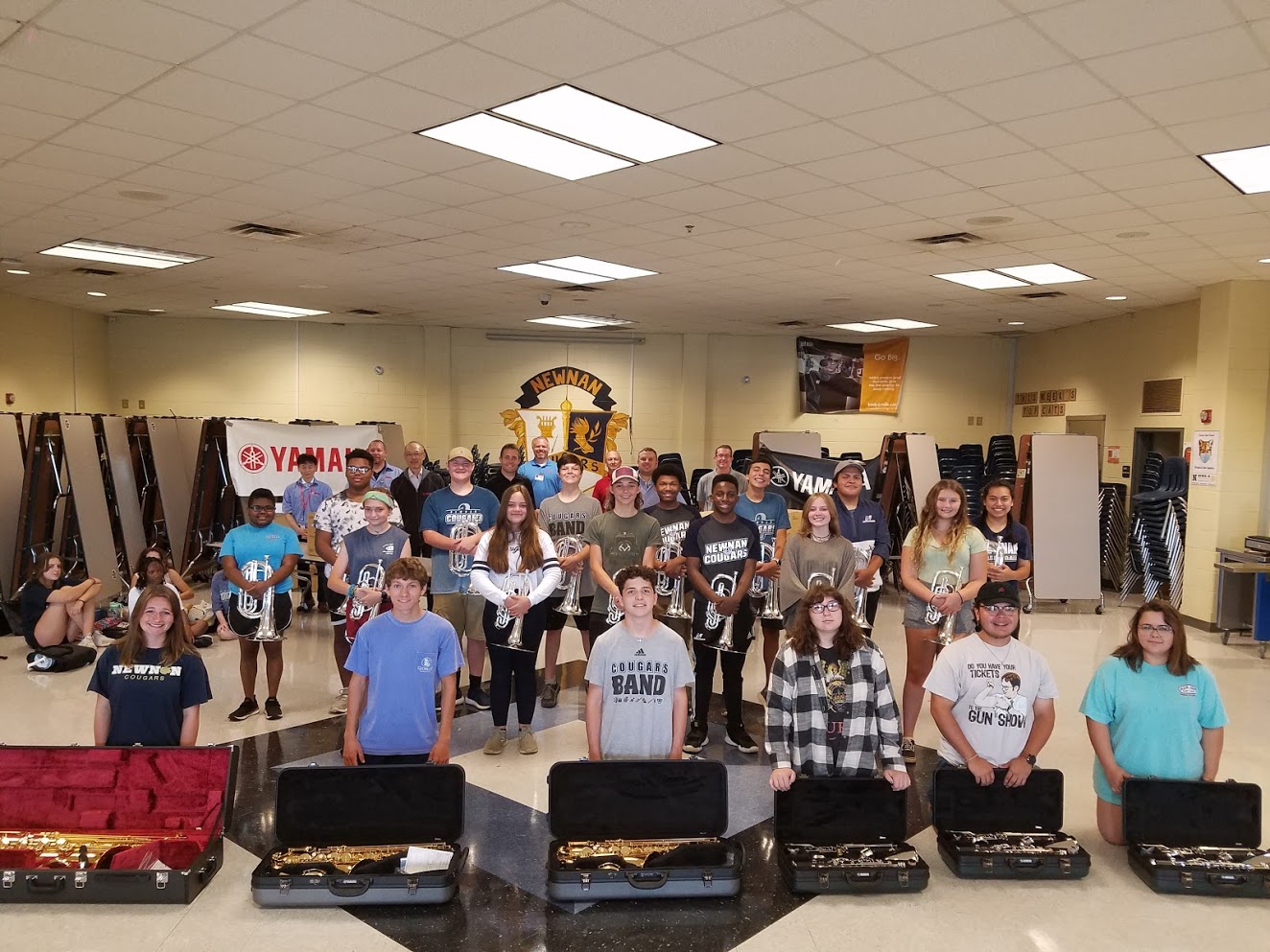 Dr. Boyd said, “I knew the kids needed music and band, now more than ever. My goal was to try and get the Marching Band back up and running by the fall to help our kids deal with the emotional roller coaster that was caused by the tornado.”

Over the next few weeks, the staff at YMMC worked together in unison with a team from YCA to develop a plan to assist Dr. Boyd and his band to get back on their feet and ready to go for the fall opening of school and the marching season. “When I heard about the devastating destruction of the tornado in the town where YMMC was located, I immediately asked what we could do to help,” said David Jewell, Partnerships and Alliances Manager for YCA. “When we found out about the destruction of the entire Band complex, we were more than happy to help them secure instruments for the fall marching season.” 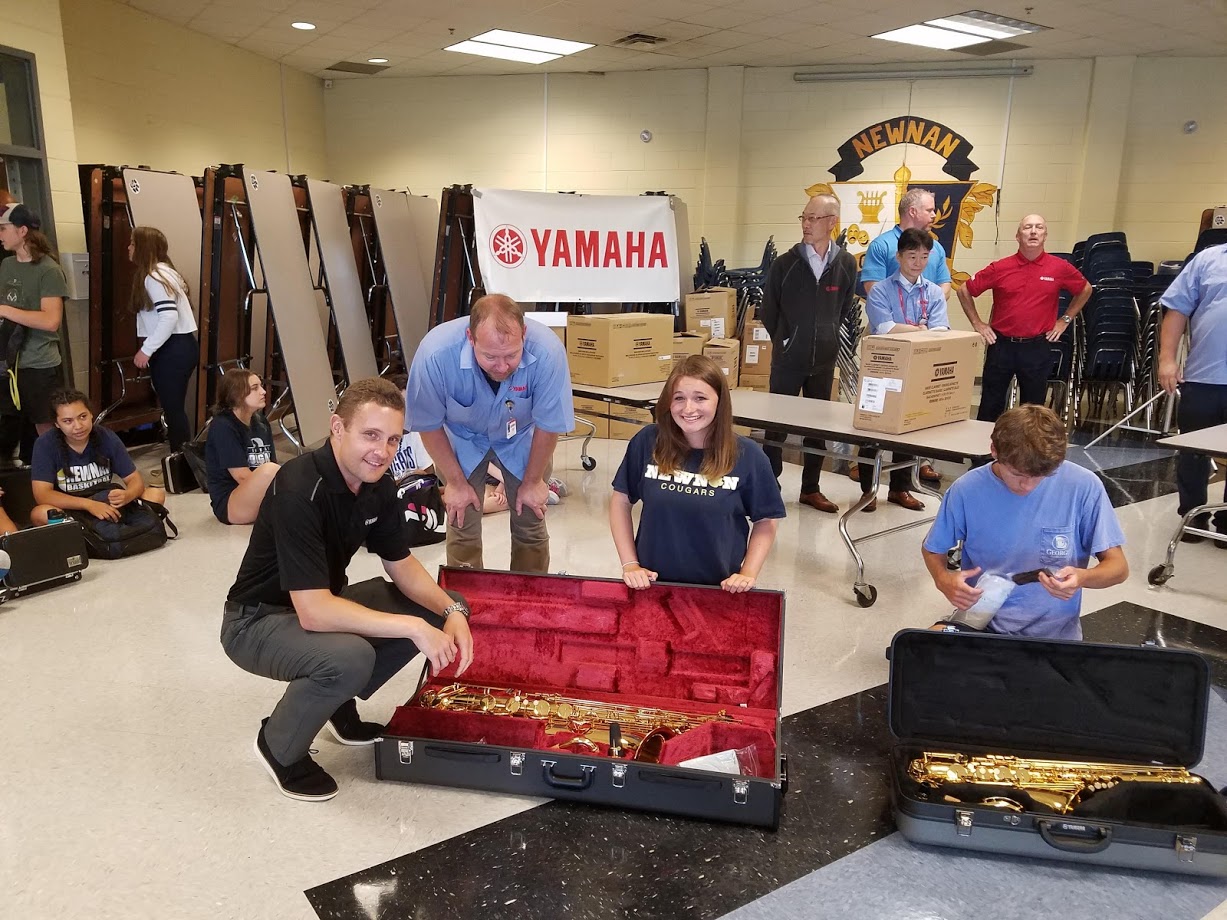 Even now, after the storm in March, insurance is not yet settled for the school, including instruments. Compounding that, instrument ordering often requires a lot of lead-time, usually six months, as they have complex manufacturing and need to be shipped internationally.  Acquiring and loaning the instruments came at a critical time.

“Yamaha didn’t just help us acquire all of the marching brass, low reeds, and marching drums that we needed,” said Dr. Boyd. “They worked a shipping miracle to get them here on time, one that involved the instrument division getting their hands on inventory from places all over the country and taking care of the shipping and receiving such that our new equipment arrived together at the YMMC plant here in Newnan. Because we can’t receive packages at Newnan High School yet.”

The entire leadership team from Yamaha Motor Manufacturing personally delivered the instruments and unboxed them with the Newnan High School Band. Band member Diego Sanchez said, “It was really, very hopeful, and encouraging, and exciting to finally realize that we were going to be able to do marching band. Unpacking it was like Christmas day. All the valves! It was all shiny and all beautiful. And it was basically a brand-new version of the exact same baritone I held last year.” 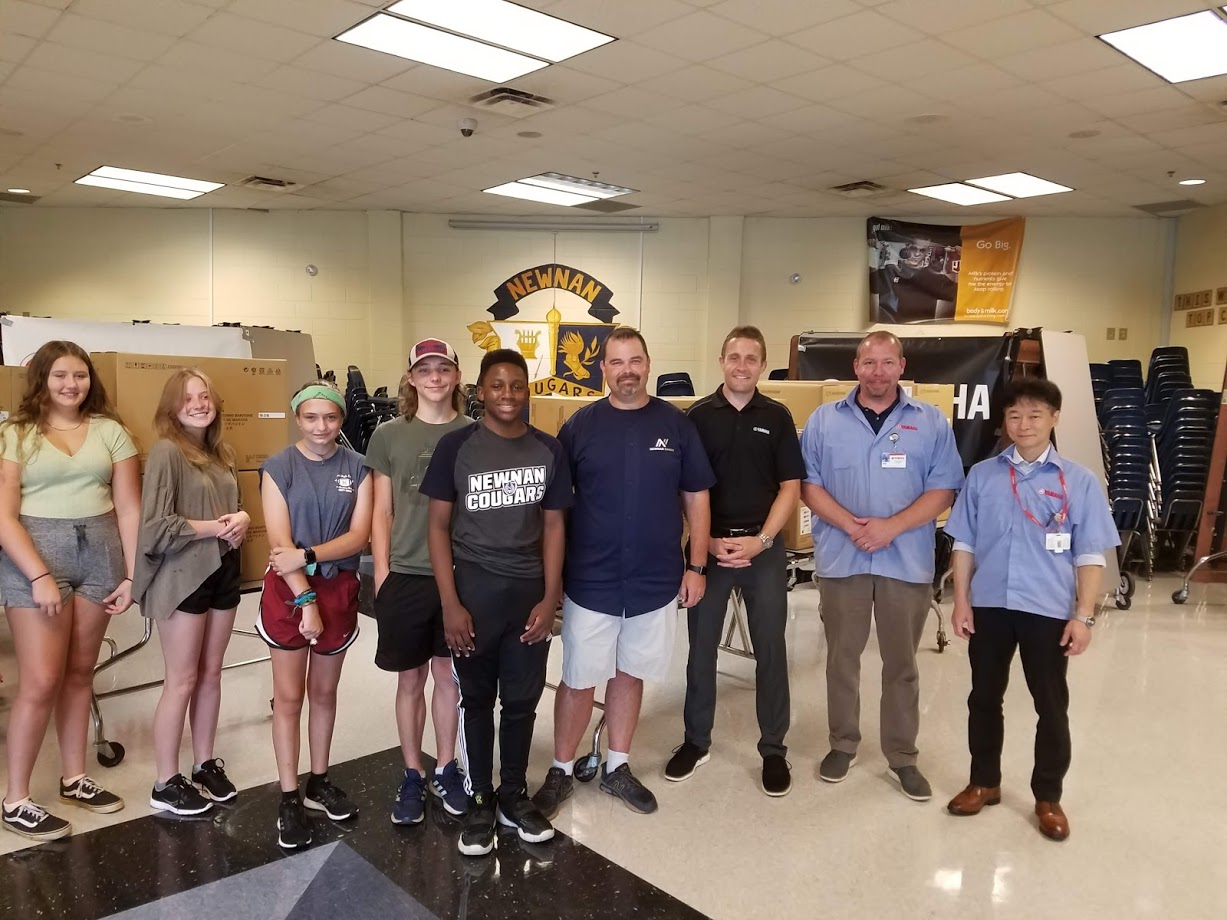 “The smiles on the students while they were unboxing was a precious experience for me. We have ‘Two Yamahas, One Passion.’ We are two companies, and we work together to make possible passion for music and memories for families. And now for these amazing band students it’s a joy to give them these lifelong memories,” said YMMC President Takahiro Imanishi, who helped with the unboxing.

Dr. Boyd agrees, “I saw that in action. I saw the instrument folks talking with the folks that make ATVs and things like that, which are totally cool, and finding ways of working together so that a group of kids could have a better experience. This year, when the Marching Cats take the field, it will be huge from Yamaha. Without Yamaha, it would not have happened. There was no way that we would have been able to get the band on the field. I’m sitting here with these instrument boxes sitting behind me thinking, ‘how in the world did Yamaha pull that off?’” 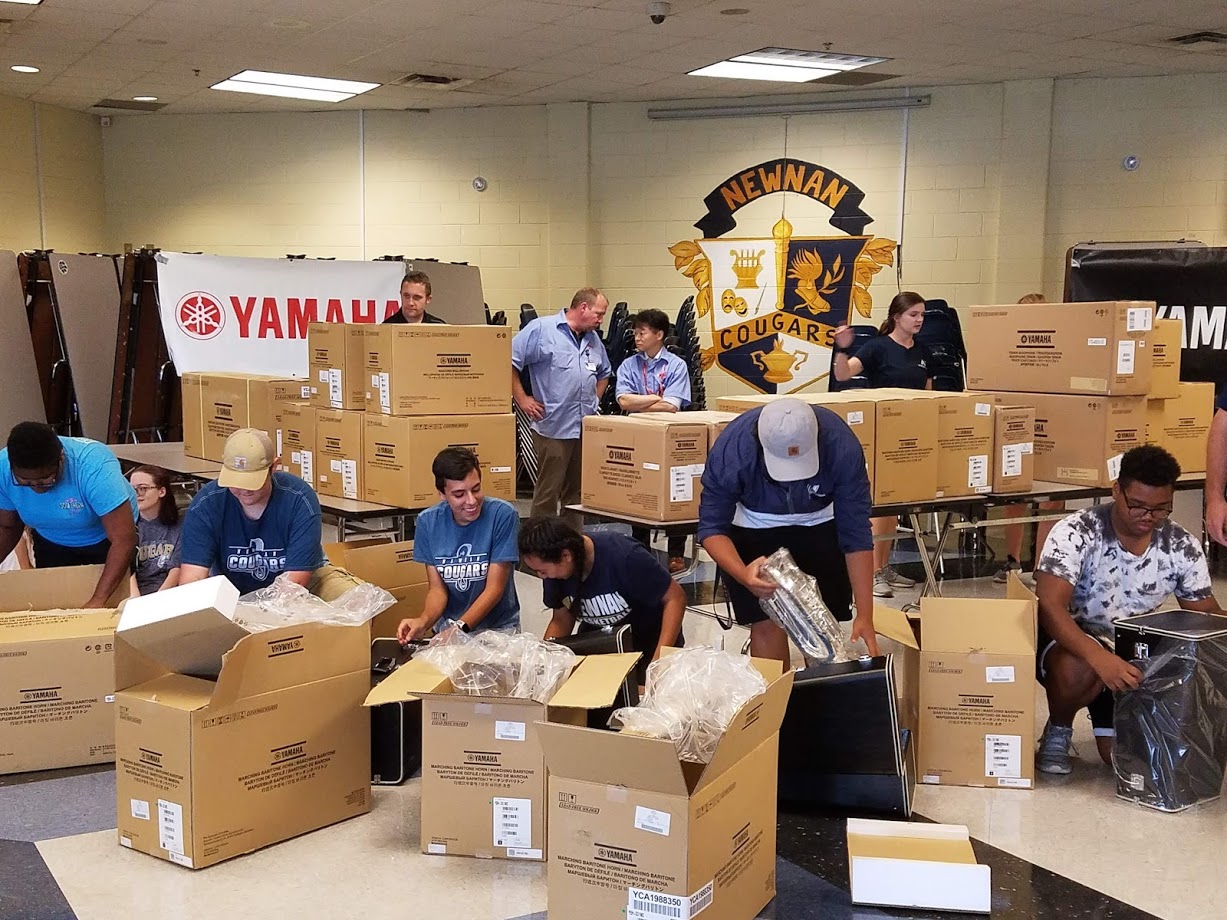 Approximately 60% of Yamaha Motor Manufacturing Corporation’s staff live in Coweta County. Many of them graduated from Newnan High School and have or had children who attended. YMMC is Coweta County’s largest private employer, and they are still growing, as demand for products is high. Local people who want to be a part of a community-oriented Yamaha team can apply to work at yamahajobs.com.

Notes from Jackson Street: Get the Vaccines!