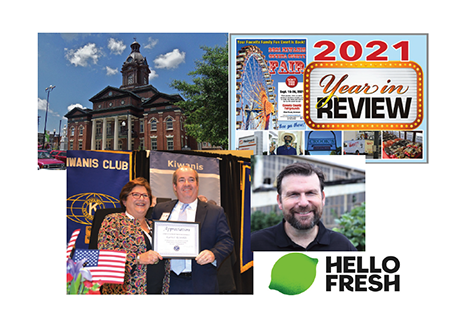 The Convention and Visitors Bureau, located in the Old Courthouse, is no more. Explore Newnan-Coweta Inc. the new city/county destination marketing arm for Coweta County, made the decision. The visitors bureau’s functions will fall under the Explore organization. Plans are to develop a new mobile visitor’s center. The current space will be redesigned and used for Probate Court expansion.

From their Facebook page: The Newnan Fire Department is proud to announce our new Chaplain, Reverend Dr. James F. Ellison (Jimmy) to our team. Dr. Ellison is the Pastor of Newnan City Church, of Newnan, GA. Pastor Ellison holds an Associate of Arts degree in Religious Studies from Young Harris College, and a Bachelor of Arts in Religion from LaGrange College. He is married to the former Beth Parrish, and they have two sons, Will (27 years old) and Ben (24 years old). Welcome to the NFD family Jimmy!!!

Georgia Secretary of State Brad Raffensperger announced that Georgia has ranked first on the Heritage Foundation’s new Election Integrity Scorecard, according to a published report. After passage of Georgia’s new election law, SB202, Georgia received 83 out of a total possible 100 points, and top marks in voter ID implementation, voter list accuracy, and citizenship verification. Georgia was ranked as the top state in the country for Election Integrity.

Not all German Shepherds are dogs.

Hello Fresh, the world’s leading meal kit company, and its community partners in Georgia, Second Helpings of Atlanta and Pratt Industries, celebrated the donation of one million pounds of food from its Newnan Distribution Center, to benefit at-risk communities, according to a press release. “We want to thank our partners in Georgia for joining us today to celebrate this important milestone,” said Uwe Voss, CEO of HelloFresh US. “At HelloFresh, we work hard to support the communities we operate in with the help of local organizations like Second Helpings Atlanta, Pratt Industries, and community leaders.”

Georgia Labor Commissioner Mark Butler said the state is employing the highest number of Georgians ever, surpassing the number of employed prior to the pandemic by over 3,000, according to a published report.  The number of employed Georgians in November was up 11,983 from October to 5,027,981. Georgia’s unemployment rate dropped another three tenths of a point to 2.8 percent in November, the lowest rate in Georgia’s recorded history.

Plastic toy dinosaurs are made from real dinosaurs.

Sen. Johnny Isakson, the Georgia Republican known for working toward bipartisan cooperation, has died. Isakson was also a congressman (taking Newt Gringich’s old seat) and ran the state Board of Education. He served for 15 years in the Senate before retiring due to Parkison’s Disease. He was 76.

Mr. Henry, who worked at Arnall Grocery for 48 years, retired on Dec. 31. He plans to sit on his porch, he said.

Adam and Eve set the most world records.

Due to the recent redrawing of Georgia’s legislative boundaries, parts of northern Coweta County will now be in House District 65, which is primarily in Fulton County. That seat is currently held by Rep. Mandisha Thomas, D-South Fulton. The district boundary change will take place with the start of the 2003 legislative session.

Longtime Coweta County Elections Director Jane Scoggins has counted her last ballot. She announced her retirement recently. We wish her the best.

The forks in restaurants have been in hundreds of other mouths.

And Blake Bass, Mr. Educator himself, is taking over as assistant head of school at Trinity Chrstian School. He is also the former Coweta County school superintendent.  What next, getting an elementary school named after him? Oh, wait …

And one more retirement. Cindy Brown, the Superior Court Clerk for the last 20 years, is retiring. Her position, which still has three years to go, will be taken over by Niki Sewell, who was deputy clerk.

Senior Living Advice: SAD and what you ...