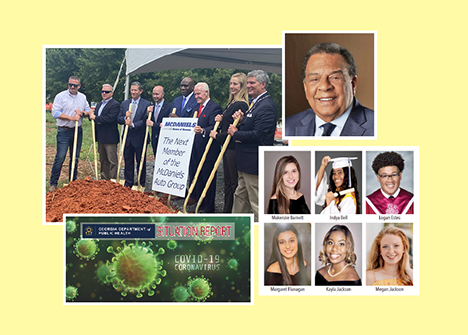 A Groundbreaking Ceremony was held on Wednesday, July 21 for McDaniels Acura of Newnan – a new auto dealership expected to open in the summer of 2022. It will be a Gen 4 facility, the first of its kind among Acura franchises, be 26,000 sq. ft. and employ 200 people. Owner Bill McDaniels says he will have three dealerships on the property site within three years. The Acura dealership site is located at the corner of Newnan Crossing Bypass and McIntosh Parkway, just in front of CTCA.

“Let sit for two minutes” is probably the most ignored instruction among microwave users.

The Georgia Department of Economic Development said the film industry recorded a blockbuster year in Georgia. During fiscal year 2021, the film and television industry set a new record with $4 billion in direct spending on productions in the state.

Christian City said Ambassador Andrew Young will be the guest speaker for the 2021 Community Champion Awards. The September 28 event honors an extraordinary group of philanthropic leaders who have dramatically improved the lives of individuals in metro Atlanta and beyond. The Community Champion Awards will pay tribute to Dan Cathy in the Individual category, The Home Depot in the Corporate category and 100 Black Men of Atlanta in the Nonprofit category.

The biggest problem with flying cars is not the traffic, but all the trash being thrown on you from careless drivers.

The Coweta Community Foundation says it is grateful for all the donations that have been given to its Tornado Relief and Recovery Fund since the March 26 tornado, and they note that local businesses have been key in donating the funds that the Foundation is now returning to the community as quickly as possible. Truist made a $20,000 donation that helped the fund reach its $400,000 milestone, and Yamaha Motor Manufacturing Corporation of America made a $55,000 donation that helped it reach the $500,000 milestone.

Newnan resident Rosanna Bowles, a Clinical Laboratory Technology student at West Georgia Technical College, has been awarded a national scholarship from the American Society of Clinical Pathology. In a continuing effort to encourage young people in the laboratory profession, the ASCP offers scholarships to outstanding students enrolled in an accredited laboratory science program in their final clinical year of education.

A Viking could have excavated a T-Rex and claimed to have killed a dragon and no one would have doubted it.

Can’t Never Could, the local nonprofit that serves those facing adversity and personal battles, has awarded six $1,000 scholarships to students whose lives have been affected by cancer. The recipients included MaKenzie Barnett, Indya Bell, Logan Estes, Margaret Flanagan, Kayla Jackson and Megan Jackson.The CNC Scholarship is designed for students who will be furthering their education and who have experienced financial burdens due to having an immediate family member with, or personally experiencing, cancer or brain tumors/illness.

Why are wedding dresses bought and tuxedos rented? The utility of each is such that it should be the other way around.

Our favorite quote from our columnists in the July issue of The Paper: “Just wear the dang bathing suit.” Samantha Brazie.

Dr. Ralitsa Akins is the new vice provost at the University of West Georgia. Akins will lead academic planning to ensure UWG’s programs remain successful and relevant to the demands of the 21st century across multiple campuses in Carrollton, Newnan and Douglasville.

Marriage is one of the few things where we consider someone an expert if they’ve only successfully done it once.

As of July 26, Coweta County has confirmed more than 9,000 cumulative COVID-19 cases since the pandemic began.

With travel on the rebound, Delta Airlines has announced the hiring of 2,216 Georgians since January 1 to join the ranks of the now nearly 30,000 who work for Delta in the state of Georgia.

The townsfolk might have liked Belle from Beauty and the Beast more if she hadn’t constantly danced around town singing about how boring they all were.

Nearly 800 students graduated from the summer commencement at the University of West Georgia. Of the 771 degrees conferred to graduates, 429 were at the graduate level, with the remaining 342 degrees being earned at the undergraduate level.

For the first time in its history, the Port of Savannah has moved 5.3 million twenty-foot equivalent container units, growing cargo volumes by 20 percent in FY2021, or nearly 900,000 TEUs compared to the previous year, according to a published report. “American companies continue to choose the Port of Savannah as a critical gateway to global trade,” said Georgia Gov. Brian Kemp.

As if you really need a reason to visit Hawaii – Chick-fil-A will be opening restaurants in the Aloha state with the first opening set for early 2022.

If Star Trek-like transporter technology were invented, the airline industry would spend billions to discredit it as unsafe and scary.