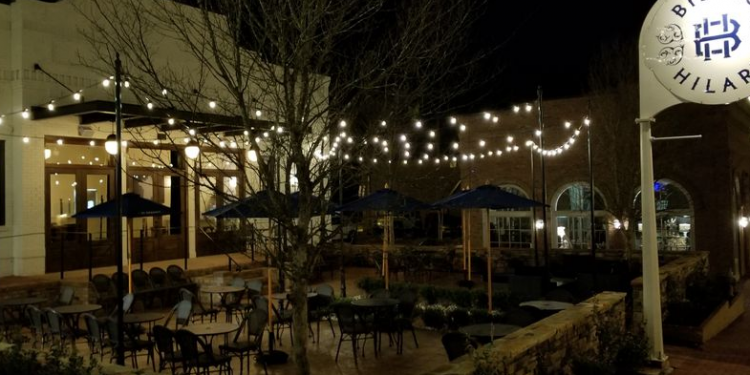 A public service announcement/request/plea from the very fine folks over at Bistro Hilary in Senoia. They have absolutely no connection to that Hillary Clinton and no, the former presidential candidate does NOT own the bistro. They even spell their name differently. So, y’all come on over and have a bite.

The word “Pennsylvania” is misspelled on the Liberty Bell.

Coweta County has added nearly 1,000 jobs, or more than 2 percent, since last year, according to a Dr. William Smith, chairman of the University of West Georgia’s economics department. The majority of the jobs were in heath care, retail and admin support.

Finland has something known as “National Jealousy Day.” Every Nov. 1, the country releases all tax records on its citizens.

A Democrat and a Republican running for the same seat in the Vermont House of Representatives ended their debate with a duet. Democrat Lucy Rogers, who plays the cello, and Republican Zachary Mayo, who plays the guitar, wanted to share a message of civility and community spirit: “We’re very tribal in how we think, and there’s a certain feel in being able to come together. There is a deeper bond that we have over party affiliation. It is not just Democrats or just Republicans. We are Americans first.”

Congrats to Kyle Harkabus, the East Coweta junior who won the Boys Individual State 7A Cross Country Championship in Carrollton. Kyle captured the title with a time of 16:08.55, eight seconds ahead of the runner-up.

Kansas produces enough wheat each year to feed everyone in the world for about two weeks.

And kudos to Parks Avery for being named the 2018 Volunteer of the Year for the city of Newnan. Avery is chairman on the Newnan Convention Center Authority and has been involved in a multitude of community endeavors.

One sunrise in Maui is so popular, you have to pay to see it.

The Leapfrog Group, a nonprofit that assigns grades to hospitals based on their record of patient safety, has announced its Fall 2018 Hospital Safety Grades and six of Piedmont Healthcare’s hospitals received A’s, the highest grade possible. That total represents twice as many hospitals as any other system in Georgia. In all, 26 hospitals in the state received A’s. Piedmont hospitals were in Athens, Atlanta, Columbus Northside Campus, Mountainside, Newnan and Newton.

One of the K9 units with the Coweta County Sheriff’s Office was used to help locate a missing elderly man near Interstate 85.

More people live in New York City than in 40 of the 50 states.

Newnan High School history teachers Frank Henderson, Steve Quesinberry and the NHS History and Social Studies department recently hosted the 5th Annual Vet-Connect 5k race. Over 250 participated in the annual race.  Proceeds from the race made possible the largest donation yet to local veterans organizations. Students and staff presented a check for $23,000 to the Veterans of Foreign Wars, Post 2667, and American Legion Post 57 in Newnan.

The Newnan-Coweta Historical Society is taking applications for a $10,000 scholarship for local students intending to pursue a college education with a history major or minor. This will be the second year the group has offered this scholarship.

It would take more than 400 years to spend a night in every Las Vegas hotel room.

The Northgate High School Vikings Cheerleaders took home the Class 6A gold from state cheerleading competitions November 10, marking the 9th time the squad has won the state championship since 2007 and the Vikings’ 4th straight title since 2015.

The city of Newnan’s Annual Christmas parade will roll into downtown on Saturday, Dec. 8 at 6 p.m. The parade will begin at Armory Road and travel against traffic on LaGrange Street, making a right hand turn on North Court Square going around the square to turn right on East Court Square, ending at Greenville Street. The parade is expected to include various floats, walking groups, decorated cars, trucks and more.

Thanks to an anonymous donor, Coweta Public Safety employees were able to deliver over 300 Thanksgiving meals to our community.

City of Newnan is sending a shout out to all of the officers and staff of the Newnan Police Department who are raising funds for cancer awareness throughout the month for #NoShaveNovember! So far, they’ve exceeded their goal of $1,500 which will be donated to the American Cancer Society.

From @bikecoweta: Congratulations to Coweta’s Jaiden Ward … Jaiden has committed to Truett McConnell College and will compete on the TMC Mountain Biking Team.

Setting an alarm is like placing a bomb that will blow up your dreams.

Coweta County residents lined streets and highways to show support for members of Bravo Company, 2/121, 48th Infantry Brigade on Nov. 26 as they were being deployed to fight in the Global War on Terror.

Dating is just hanging out with someone until you figure out what is wrong with them.