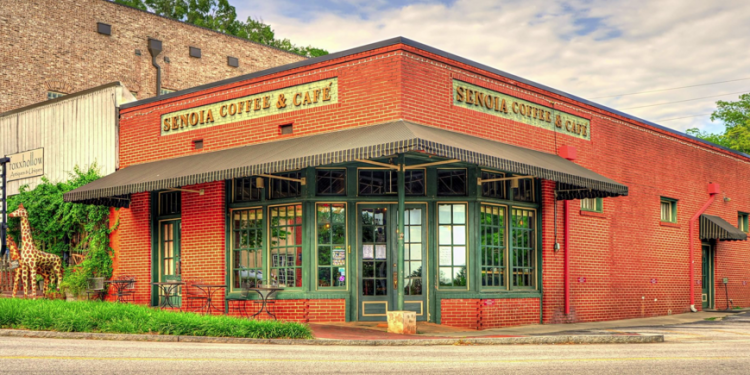 Notes from here, there and the Internet:

Financial Advisor Chad A. Smith of the financial services firm Edward Jones in Newnan recently received the firm’s exclusive Spirit of Partnership Award for outstanding performance during 2019.  “He has demonstrated unyielding dedication and enthusiasm for his business of serving individual investors and has reached a benchmark in his career that deserves to be recognized. The Spirit of Partnership Award provides that recognition.”

Senoia Coffee and Cafe, located at 1 Main St., in downtown Senoia, is moving. Not a big jump really, but rather across the street and up a couple of buildings at 30 Main St. Plans are to not only have the coffee shop there, but also a few other pop-up food market businesses as well. Big move should be around the first of the year.

Governor Brian P. Kemp announced that the State of Georgia has shattered its own record by being named No. 1 for business climate for the eighth consecutive year by Site Selection magazine. In 2019, Georgia became the only state to earn this distinction seven consecutive times in the history of Site Selection’s rankings, and it is now the only state to receive the honor eight times in a row.

If elevators had not been invented, CEOs and other powerful people would work on the first floor as a status symbol.

Nicholas Martex Nelson, 38, is charged with multiple counts of murder in what law enforement is calling the county’s first “killing spee.” Six people were killed over a four-day period.

Waffle House, which stays open even during hurricanes, is releasing its first … beer. And it smells just like bacon, according to delish.com. “Collaborating with Greensboro, Georgia brewing company Oconee Brewing Company, the new brew will be called Bacon & Kegs! and offers up a 6.5% ABV. More at https://www.delish.com/food-news/a34679276/waffle-house-bacon-infused-beer/

If a morgue workers dies, they still have to come into the office one more time.

Rodney Riggs, former deputy chief of the Newnan Police Department, was named the 2020 Marine of the Year. This is the 245th anniversary of the founding of the Marine Corps. Congratulations!

Coffee is one of the few socially acceptable addictions

The Great Pumpkin never showed on broadcast television this year, but after a deal with PBS, the Charlie Brown Thanksgiving and Christmas specials will return to the air, the AP reports. Last month, Apple TV+ became the new home to the beloved Peanuts holiday specials. That sparked an outcry from viewers who were accustomed to annually tuning in on network TV. PBS for ad-free broadcasts of A Charlie Brown Thanksgiving (on Nov. 22) and A Charlie Brown Christmas (on Dec. 13).

Tickets for the East Coweta – Newnan high school football game sound out in minutes. There were limited spaces available due to COVID. East Coweta won 27 to 26.

There’s a new Burger King in town. It’s located across from Piedmont Newnan Hospital on Poplar Road and yes, you can have it your way.

The four-year graduation rate for Coweta County School System high school students rose to 91.6 percent in 2020, with over 90 percent of seniors graduating on-time from all three Coweta high schools.That reflects a more than 4 percentage point rise over Coweta County’s 2019 on-time graduation rate of 86.9 percent.  It is also approximately 8 percentage points higher than the state of Georgia’s average, according to the state Department of Education.

Congratulations to Cindy Brown, Coweta County Superior Court Clerk, who just one a top award from the Superior Court Clerks’ Association of Georgia. The ECLAT award stands for Exceptional Commitment, Leadership, Accomplishment and Teamwork and is given to clerks who exhibit high levels of leadership and innovation.

Coffee is basically your morning beer.

And best wishes to Dr. Jack Powell, who is retiring. Powell is a well-known and respected orthopedic surgeon and founder of Georgia Bone and Joint.

From Newnan Coweta Habitat For Humanity: In this week of Thanksgiving, we are meditating on the many ways that our volunteers make NCHFH special. You fill our house-builds and our retail facility with personality and a passion for our mission. You do the work that no one sees, but that changes lives for the better. Thanks to you, over 60 Coweta families have access to stable and affordable housing who wouldn’t otherwise.

Above Photo from Senoia Coffee and Cafe Facebook page.