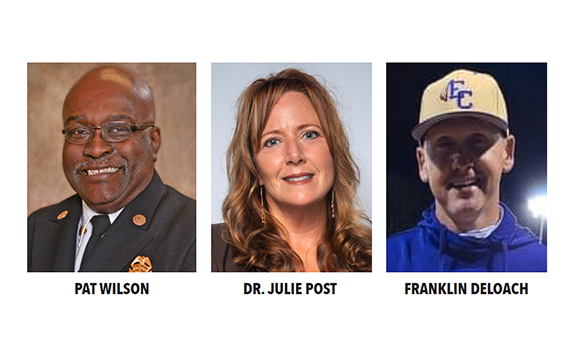 With better weather, you might want to check out the new 9-hole disc golf course open on Temple Ave. at the Coweta Recreation Department. Another 18-hole course is underway at the Hunter Recreation Complex off Highway 16.

If people stranded on desert islands don’t clean up their “HELP,” signs before they leave, there are going to be a lot of rescuers not finding anyone.

The Coweta County Transfer Station, which burned down last March, should be reopening by the end of the month. Everybody whoop, whoop.

The city of Newnan has purchased the old Caldwell Tanks property in downtown Newnan. A comprehensive plan is underway to determine what to do with it and many other aspects of Newnan.

4 a.m. is the hour you are up really late or really early.

Coweta County Fire Chief Pat Wilson resigned effective March 31, 2021, citing personal reasons. Chief Wilson has led the 220-member unit for five years and was selected in 2016 after a nationwide search.  “Chief Wilson brought a new perspective and approach and we are better as a result of his leadership and contributions,” said Michael Fouts, County Administrator. “We wish him the best as he moves to the next phase of his career.”

Hat tip: Yamaha Motor Manufacturing of America in Newnan recently donated a new golf cart to Piedmont Newnan Hospital. The golf carts are driven by hospital volunteers and provide a free shuttle to those coming into and leaving the hospital.

Extra fries in your is going to become a thing of the past onc fast food workers are replaced by robots.

Mainstreet Newnan will not be rescheduling the Spring Art Walk that was canceled due to the tornado.

Everyone, deep down, just wants to touch a electric fence to see if it really works.

The Vidalia Onion Committee said Vidalia onions are on the official menu for the 2021 Kentucky Derby and will be featured in several dishes served to patrons of the Most Exciting Two Minutes in Sports.

Schools put hundreds of kids in cafeterias and then get mad when they are loud.

Georgia Bone and Joint has expanded to Griffin in Spalding County. The practice took over a former one, known as Orthopaedic Solutions, located there.

The Kia Telluride has won the 2021 Kelley Blue Book Best Resale Value Award in the 3-Row Midsize SUV category.  The award recognizes models with the lowest depreciation among competitors during the first five years of vehicle ownership.  Depreciation is often the most significant yet unexpected cost incurred during ownership of a vehicle and can impact overall value.