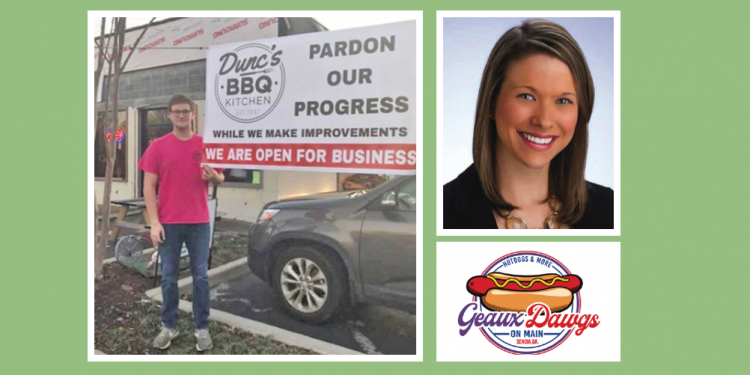 Kelly Hines will take over as the new director of the Coweta Samaritan Clinic on March 1. Previously, she was at the Newnan location of Cancer Treatment Centers of America, where she served as Director of Regional Development. Prior to that, Kelly was Director of Public Relations and Communications for Piedmont Newnan Hospital, and she began her career as a development officer with Children’s Healthcare of Atlanta.

From @uwestga. Congratulations to @uwgcheer  for their amazing UCA Championship wins! Not only did both squads come home winners, but this makes the SEVENTH CONSECUTIVE for #UWG Coed Cheerleading! #GoWolves.

•••
Don’t panic, Dunc’s BBQ Kitchen has not shut down. The restaurant in front of the University of West Georgia is simply getting a facelift. Besides exterior work, they are also getting the drive-thru back in order. And for those looking for some catering, Dunc’s now has an offsite commercial kitchen to handle just about any number of mouths.

•••
from @newnanartrez Mary Beth Meehan’s in-depth look at Newnan, her series of mammoth photographs titled “Seeing Newnan” was featured recently on the front page of the Sunday edition of The New York Times. This project was begun while she was an early participant in Newnan’s Artist in Residence program, our own ArtRez. Her powerful installation has started important conversations in and about Newnan and has, as of today, achieved national recognition.

Amazon will open a 1-million-square-foot warehouse in Newnan creating 500 jobs, according to Gov. Brian Kemp. The warehouse will be built near the county’s airport at the Cubes of Bridgeport industrial site. Like other sites throughout the country, employees will pack and ship orders from the world’s largest retailer.

From @cowetagoverment: Coweta County EMS has been awarded the EMS Service of the Year award and the Paramedic of the Year Award for a second year in a row! The honors were presented in mid-January by the Region 4 EMS Council. Congrats!!

“Darth” is to Sith lords what “Lil” is to rappers.

Carrie Beavers Markham was sworn in as the new probate judge on Jan. 7. She replaced Judge Mary Cranford, who retired. Markham grew up in Newnan and most recently worked with Rosenzweig, Jones, Horne and Griffis.

The Women’s Services Department at Piedmont Newnan Hospital decided to collect can goods and non-perishable items this holiday season as a way to give back to the local community. They recently delivered 479 items to Bridging the Gap to restock their food pantry for the new year.

From Keep Newnan Beautiful: A HUGE shout out to Coweta County Environmental Management for helping us with our Tire Amnesty Day last month! Both trailers were filled by 10:30am. We had 145 residents participate this year! All of these tires will be carted off to Quality Tire Recycling in Jackson, GA to be chipped and made into other products! Thank you to all of our volunteers for your assistance! We couldn’t do it without you!

Tax Commissioner Tommy Ferrel is retiring from the post he held since 1979. He is retiring at the end of February and Robi Brook, deputy tax commissioner, is taking his place until the next election.

The scariest fireworks are the ones that don’t explode.

City Councilman George Alexander is the new mayor pro tem for the city of Newnan. He was elected by a majority of council members. He replaces fellow councilwoman Cynthia Jenkins, who served in that capacity for 14 years.

When they discover the center of the universe, there are going to be a lot of upset people who thought they were it.

From Crain’s Cleveland Business: Retail Value Inc. of Beachwood, the company formed to sell shopping centers owned by the former DDR Corp., has sold the Newnan Crossing center for $11.6 million. The deal excludes a portion of the property with a Lowe’s store. The buyer was not disclosed. The more than 400,000-square-foot Newnan Crossing is anchored by tenants including BJ’s Wholesale Club, TJ Maxx, Old Navy and Michaels. Net proceeds of the sale were used to repay mortgage debt associated with Retail Value, the company said in the release. https://www.crainscleveland.com/real-estate/retail-value-inc-sells-georgia-center-116-million

A Madras Middle School student who brought a “hit list” with six names on it  was removed from school on Jan. 15. In a letter to parents, Principal Lorraine Johnson said another student brought the matter to administrators after hearing about the list in the cafeteria earlier in the week. Officers immediately removed the student from class, and later from the school. An investigation continues.

When a Serbian shoots an Austrian in Bosnia, so the UK attacks Germany for attacking France through Belgium, so you, an Australian, have to fight the Turkish in Palestine.