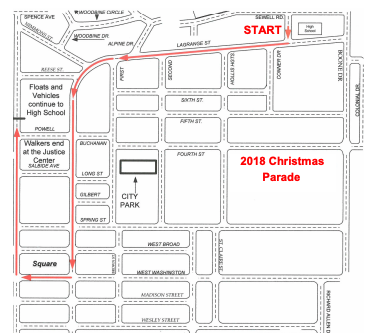 The city of Newnan’s Annual Christmas parade will roll into downtown on Saturday, Dec. 15 at 6 p.m. It was originally scheduled for Dec. 8, but inclement weather postponed the event by one week.

The parade will begin at Armory Road and travel against traffic on LaGrange Street, making a right hand turn on North Court Square going around the square to turn right on East Court Square, ending at Greenville Street. The parade is expected to include various floats, walking groups, decorated cars, trucks and more.

This year’s theme is A Parade of Christmas Trees, and participants are encouraged to incorporate Christmas trees into their floats.

“Each year, the parade is an anticipated activity for the city. We’re looking forward to spreading the Christmas cheer to onlookers attending this year’s event from the youngest all the way to the young at heart,” said Ashley Copeland, city of Newnan, communications manager.

Bill and Anita Headley will serve as this year’s parade Grand Marshalls. Bill, is a retired construction contractor and founder of Headley Construction, when he graduated from the university in spring of 2017. His wife, Anita, most notably known for her philanthropic work throughout the Newnan-Coweta area, and as a supporter and patron of the art community, as well as being active as a member of Central Baptist Church.

“They are both great contributors to the community as a whole, and they both represent what hardworking folks can do for the community,” said Norma Haynes, chair of the City’s Christmas Commission Committee.

In addition, there will also be a People’s Choice Award in which this category is an after parade award specifically designed to drive more people to the City’s Facebook page. “We’re looking to make this event more social media friendly, and get on lookers more involved,” said Copeland. The float with the most unrepeated ‘likes’ on the City’s Facebook page wins. To be eligible for this award the float must have won in one of the five categories on the night of the parade.

“We’ve reduced the maximum length of the trailer and floats participating in the parade to 48 feet,” said Copeland.