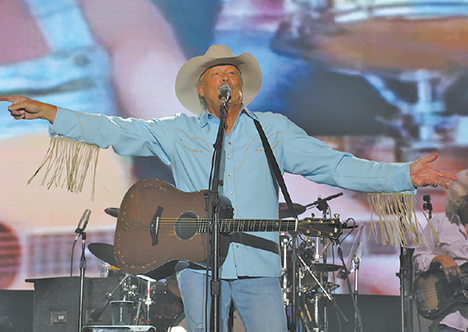 Above photo by Bob Shapiro for the Coweta Community Foundation

The June 26 sold-out “Where I Come From” country music benefit featuring Alan Jackson raised much-needed funds for local tornado relief efforts, according to Coweta Community Foundation Executive Director Kristin Webb. While official totals haven’t been received from Jackson’s team, Webb said she knows the donation will make a tremendous difference in the lives of local residents affected by the March 26 tornado.

“We’re been overwhelmed by the generosity of this community and our sponsors,” Webb said. “We can’t thank Alan enough for bringing this concert to Newnan and donating the proceeds to tornado relief. This was a huge undertaking, and as we saw on Saturday, he and the other performers pulled it off and made the fans here incredibly happy with a fantastic concert. We’re so grateful they wanted to help with our tornado relief effort, and our board and advisory committee are already at work, with the help of our community partners, determining how these funds can be utilized to create the most impact.  We look forward to sharing those details with the community in the weeks and months ahead.”

Jackson performed 22 of his classics during the concert, and the crowd also enjoyed performances by Adam Wright, Big City Brian Wright, Caylee Hammack, and Chris Young. Earlier in the day, the lineup featured Jered Ames from AJ’s Good Time Bar in Nashville and locals Corbette Jackson, Will Finley and Doug Kees.

The EF4 tornado that struck Newnan on March 26 affected more than 1,700 homes, with some demolished. As a result, Coweta County EMA established its emergency fund with the Foundation. In just a matter of days, the Foundation set to work creating a system that resulted in the creation of the Hope Has No Deductible grant program. Through this and other programs, the Foundation has already returned over $320,000 prior to the June 26 benefit concert—to assist over 250 individuals directly and 13 local nonprofit agencies as they carry out the work of providing disaster relief in Coweta County.

“Now that many of the immediate needs following the aftermath of the tornado have been met, our focus is shifting increasingly to the long-term recovery needs of the community, and we’re going to be focused on that for a long time to come,” Webb said. “Thanks to this concert, and the generous donations raised through that effort, we will have a great start on assisting those who need it most through the nonprofit organizations in our community. Donations also include a $500,000 in-kind material donation from Cornerstone Building, which has been directed through Habitat International toward disaster relief in Coweta County. Those materials will be utilized through a partnership with the Newnan-Coweta Habitat for Humanity organization.”

Those who weren’t able to attend the concert but would like to make a donation associated with the event may donate at https://www.cowetafoundation.org.

The Coweta Community Foundation is a publicly supported 501(c)3 organization that helps focus local philanthropy on the community’s changing needs. The Foundation manages individual gifts and bequests as an endowed pool of assets, distributing grants to a wide variety of organizations that enhance and support the quality of life in Coweta County, while maintaining the charitable intent of the donors. For more information, call the Foundation at 770-253-1833.