Notes from Jackson Street: ‘Nothing New Under The Sun’ 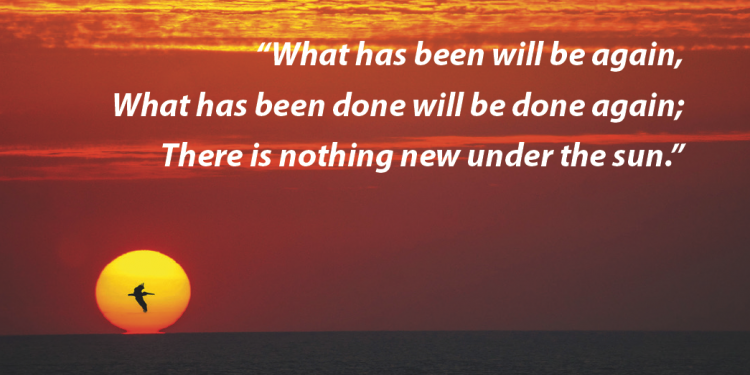 A really smart guy once said something along the lines of “there is really nothing new in the world.”

Technically, I am paraphrasing. What he really said, and I’m using the New International Version here, was:


There is nothing new under the sun.”

I can spell Ecclesiastes correctly because I had to in order to win a bet. I realize “betting” and books of the Bible don’t necessarily mix well, but that’s for another column.

Returning to the whole “nothing new under the sun” idea reminds me of the recent holidays. I give thanks, thanks that said holidays are over. All three of our boys, sometimes affectionately, sometimes not, are referred to as the SONS of Thunder. I can assure you that nickname is quite appropriate.

We now have a junior and freshman in college, another one in high school. And they were together, all under one roof. Said roof being our roof by the way. There was a lot of testosterone flying around. And the two college SONs are quite astute at explaining to me how little I really know. A polite way of saying I’m dumb.

The boys had to wait for each other and had to come down together Christmas morning. That is usually when the fights would start because someone couldn’t fall asleep the night before because Santa was coming and was now dead to the world.

Finally they would come down, each to his area of the living room where Santa had provided each with a small version of, well, everything. And Santa, by the way, does not wrap. Regardless of his desire to save trees, Santa realizes I will not help him wrap toys that will take a nanosecond to tear apart. It’s a question of time management.

Soon afterward would come the “that’s mine,” “don’t touch that,” “give me that back,” and a blood curdling scream after one SON’s 5,000 piece Star Wars Galactic Whatever is bumped by another SON and 3,000 of those pieces are now on the floor.

We are no longer required to empty shelves of toy stores; now we just empty wallets. Cash is king.

“There is nothing new under the sun.”

Or, to borrow a more modern phrase, one I found on the back of a tricked out pickup truck in Oklahoma, “the difference between men and boys is the price of their toys.”