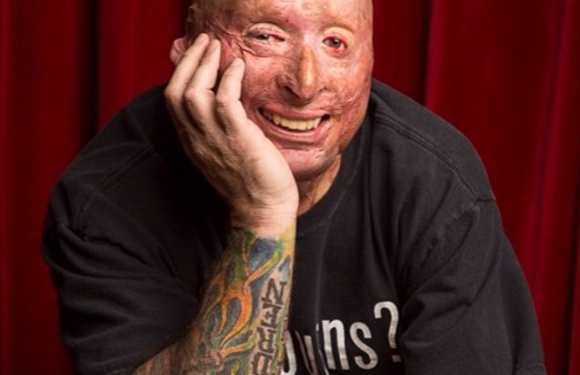 Can’t Never Could is pleased to announce that Bobby Henline, aka the “Well-Done Comedian,” will be the speaker for CNC’s dinner fundraiser on Monday, March 4. The event will be held at 6 p.m. at The Newnan Centre. Tickets are $75 and will include dinner.

Retired Army Staff Sergeant Bobby Henline last served with the 82nd Airborne Division. It was during his 13th year of service and fourth tour in Iraq when an IED exploded beneath his Humvee. He stumbled from the wreck, a “human torch” and was extinguished by a fellow soldier. Bobby suffered burns covering almost 40% of his body. His injuries included fractured facial bones and his head was burned to the skull. He was put into a medically induced coma for two weeks and flown home.

The upbeat, positive and humorous Bobby kept the spirits up of his nurses and fellow patients as he relied on humor to get him through each day. Singing to his occupational therapist caused her to challenge him to go to an open mic night. He promised on a pinky swear. Little did he know, that promise would lead him to his comedy career.

Comedy helps Bobby to keep his PTSD and anxiety at bay and allows him to share his story of healing with others in a positive, funny and inspirational way. Among the venues he has performed are Brad Garrett’s Comedy Club, Las Vegas; Laugh Factory, Chicago; and Hollywood Improv, Los Angeles.

Bobby’s experiences have been featured in documentaries as well as CNN, PBS KET, NPR, Today.com and Time.com, Time Magazine People Magazine, The Huffington Post, Guideposts, Reader’s Digest and various other television, radio and podcasts around the world.

Tickets are available for purchase on our website at www.cantnevercouldinc.com. Ticket sales are limited and, as always, as a sell-out audience is expected.

For more information, please contact Christi Estes, Co-Founder at 678-618-2356 or by email at [email protected].

Consider This: Connect with Clients the Way ...