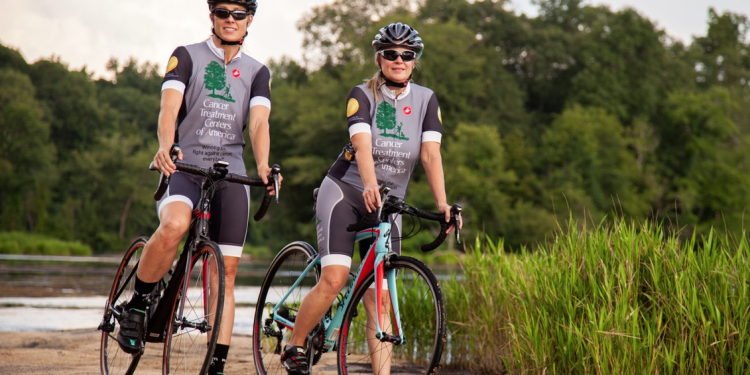 Cancer Treatment Centers of America (CTCA), Atlanta, has signed on as the title sponsor for Team Assistance in Healthcare in the 2020 Race Across America.

The two team members are Marsha Suber of Senoia, who serves as vice president of oncology services and chief nursing officer at CTCA Atlanta (here in Newnan), and veteran racer Martha Hall of Peachtree City, who works for Fayette County State Court as an accountability court coordinator. The goal of Team AIH is to raise $100,000 for Southeastern Assistance in Healthcare. The local nonprofit provides financial support to those who are undergoing active cancer treatment.

Since its inception in 2012, Southeastern AIS has distributed over $1.3 million in financial support to cancer patients, and officials with AIS note that requests for assistance have more than doubled over one year ago.

Assistance in Healthcare supports cancer patients at hospitals in Fulton, Dekalb, Gwinnett, Cobb, Clayton, Coweta, Douglas, Fayette, and Henry counties. Any patient receiving care at a facility in one of these counties is eligible for AIH assistance.

“Helping cancer patients is personal for Marsha and Martha, and it’s personal for our team at CTCA,” said David Kent, president and CEO of CTCA Atlanta. “We hope more people will back this duo and add to the impact of Assistance in Healthcare, a cornerstone of our efforts to help alleviate the financial burden that too often comes with a cancer diagnosis.”

Suber said she is “overjoyed that a cancer hospital is helping patients beyond just the medical costs of cancer care. I’m thankful that CTCA ‘gets it’ and recognizes that cancer patients face challenges beyond medical bills and sometimes need help with day-to-day expenses. I’m so pleased that CTCA is on board and willing to support cancer patients from nine metro counties, not just their own patients.”

Race Across America (RAAM) starts in Oceanside, California next June, under one of the state’s longest piers, and RAAM will span 3,000 miles, with cyclists climbing 175,000 feet, crossing 12 states, and finishing at the City Dock in Annapolis, Maryland. The west-to-east route will have racers crossing three major mountain ranges, and it crosses four of America’s longest rivers and the Great Plains, passing through American landmarks such as the Mojave and Sonoran Deserts, Monument Valley, Great Plains and Gettysburg.

According to Race Across America, the race is open to both amateur and professional racers, who participate in solo, two-, four- and eight-person relay teams. RAAM is considered not only one of the most challenging races in the world but also a popular way for racers to raise awareness and money for charities of their choice. RAAM racers have raised over $2 million per year over the past five years.

Pictured above: Gearing up for the 2020 Race Across America are Martha Hall of Peachtree City and Marsha Suber of Senoia. (Photo courtesy of Sarah Suber)