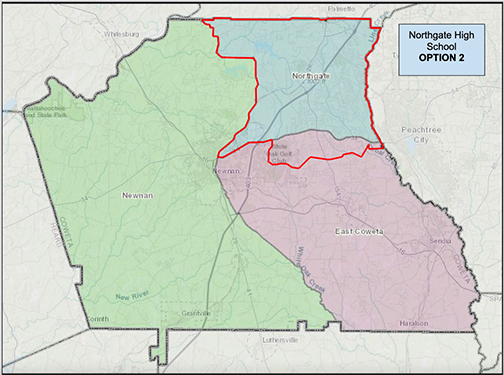 The Coweta County Board of Education approved the proposed redistricting of approximately 450 students now in East Coweta High School to Northgate High School next year, at its October meeting.

The board approved the Option 2 redistricting map recommended by a parent committee earlier in 2021.  The redistricting – near the district’s boundary at Georgia Highway 34  – will go into effect in August of 2022.

A list of streets and neighborhoods incorporated into the specific map options can be found at the link here. Scroll down to see if a street would be affected by the redistricting. Affected households are also being notified by letter.

The redistricting moves northern portions of the current East Coweta High School district between highway 34 and Lower Fayetteville Road into Northgate High School’s district, and conforms Northgate’s boundaries, in the eastern areas, to include the borders of the new Blake Bass Middle School, and moves several areas in the White Oak neighborhoods into the Northgate District starting next school year.

The new Northgate wing is being built to include a new and larger band room, larger chorus room and larger drama room, 2 new art rooms, 2 science labs, and 4 additional general classrooms. In addition to the new classroom wing, renovations at Northgate will also provide 3 more classrooms on campus.

The project will expand Northgate High school by a total 14 classrooms, to an overall capacity similar to Newnan High School’s. The approved redistricting will increase Northgate’s enrollment in line with that new capacity, and reduce East Coweta’s enrollment.