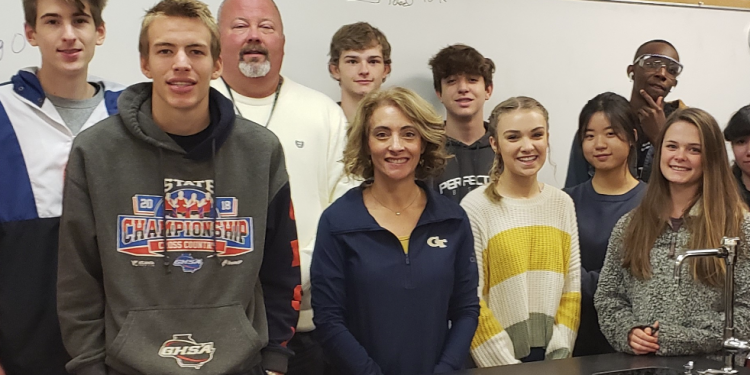 East Coweta Chemistry teacher Martha Milam has been named as a state of Georgia winner of the Presidential Award for Excellence in Mathematics and Science Teaching (PAEMST).

She was one of four Georgia teachers who received the national award.  The PAEMST, established in 1983, is the highest award given by the U.S. Government to kindergarten through 12th grade teachers of mathematics and science. Milam was honored with the distinction in the category of upper-grades science teaching.

Milam travelled to Washington, D.C., in October, as selectees across the United States were honored.  Milam said she was “grateful and honored to represent Coweta County School, the state of Georgia, and all educators” in the nation’s capital.

The East Coweta High School teacher spent three days in Washington, accompanied by her mother and daughter (also a chemist, and a chemistry engineering student, respectively).   Milam’s visit included a trip to the White House and an awards ceremony, dinner at the Kennedy Center, and professional development with national officials peers from across the U.S.

“It was an exciting time, and I joined over 200 teachers for a three-day action-packed adventure that included professional learning, conversations with policymakers, and celebration for our achievements in teaching,” said Milam. “It was thrilling and humbling to be part of such a dedicated group of teachers. I was sincerely proud to talk about the great work we’re doing in Coweta County and in Georgia.”

Milam is a 16-year educator, and a leader in STEM (Science, Technology, Engineering and Math) programs at East Coweta High School and in the Coweta school system.  She has taught AP Chemistry and physical science at East Coweta High School since 2008. She was Coweta County’s 2015 Teacher of the Year, and was selected as a finalist for Georgia Teacher of the Year in 2016.

East Coweta High School Principal Steve Allen said that the school is proud of Milam’s honor, and to have her as member of the school’s faculty.

“Mrs. Milam has created a student-centered classroom where students feel comfortable and have fun learning,” said Allen.  “She motivates her students to accomplish difficult tasks and rise to the challenging work of science. She has been instrumental in igniting a passion for STEM education and collaborates with her colleagues to share strategies and technology to make our team better. She is a role model for others.”

Milam is a 1990 graduate of Furman University, and earned her master’s degree from the Georgia Institute of Technology in 1992.  She began her career working as a chemist for Michelin Tire, but followed her passion to begin a career in education.  She also taught at Cypress Creek High School and at the University of Houston earlier in her career.

PAEMST awardees come from schools in all 50 States, and are honored (four in each state) for Science and Math in grades K-6 and 7th-12th.  Other Georgia teachers honored included Ashley Greenway of Elm Street Elementary School in Rome City Schools, Tanasha Mahone of Burgess-Peterson Academy in Atlanta Public Schools, and Billy Singletary of Coahulla Creek High School in Whitfield County Schools.

Nominations and awards are facilitated by the White House Office of Science and Technology Policy and the National Science Foundation. A panel of mathematicians, scientists and educators at state and national levels assess the applications before recommending nominees. Teachers are chosen based on their distinction in the classroom, and dedication to improving science, technology, engineering and math (STEM) education.

Milam said that many of the activities and discussions during her trip to the nation’s capitol focused on STEM education and the recruitment of new generations of STEM teachers.

“After meeting with STEM teachers from across the United States, I realize how fortunate we are in Coweta County to provide a strong STEM education for our students,” she said.  “We have numerous opportunities for our students to pursue STEM, including Advanced Placement and dual enrollment classes in math, science, and technology. Our Central Educational Center offers many unique STEM, and our schools offer an array of extracurricular activities like Science Olympiad, math teams, technology clubs, and robotics teams. In order to experience real-world careers, many students work in STEM internships or conduct STEM research.”

“It is a great privilege to work in a school district that encourages us as teachers to pursue our goals and seek out what uniquely inspires us,” said Milam.  “When teachers can be creative in the classroom, it ultimately leads to the success of our students.”

“A nationwide problem that we cannot ignore, however, is the lack of young people who are training to become STEM educators,” she said.  “Many colleges are experiencing significant decreases in the number of students in their STEM teacher prep programs. Students who are talented in math and science have the potential to earn significantly high salaries, and for that reason, they don’t see teaching as a financially wise career path.”

“At the state and national levels, we must find ways to uplift and improve the teaching profession. We must also find ways for our current STEM teachers to deliver content more efficiently using technology. Being STEM-strong is vital to our national economy, and educating our children is our most important endeavor. We need to take this issue seriously and energize qualified students to become the next generation of STEM educators.”

East Coweta Chemistry teacher Martha Milam has been named as one of four state of Georgia winners of the Presidential Award for Excellence in Mathematics and Science Teaching.  Milam, above center, is a 16-year educator.  She is joined by her 2nd block Chemistry class and, at her left, East Coweta High School principal Steve Allen. 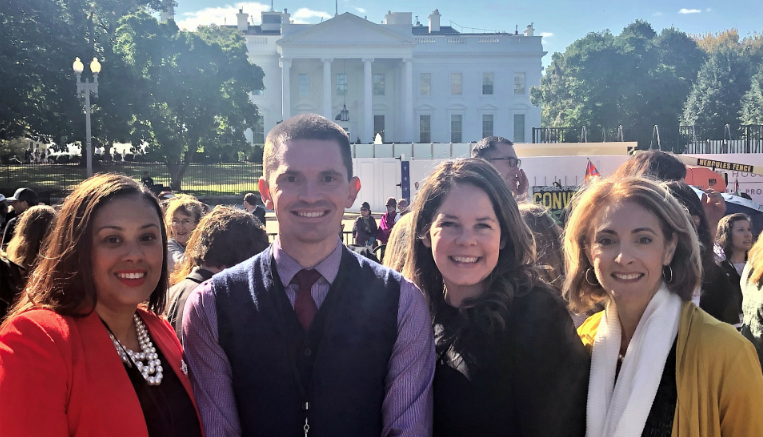