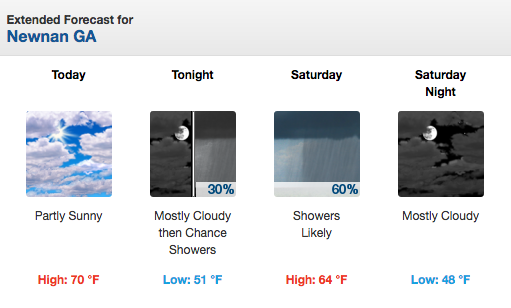 After reaching the mid-80s earlier in the week, high temperatures return to seasonal averages for April this weekend.

The National Weather Service in Peachtree City says to expect high temps of 70 today, 64 on Saturday and 70 again on Sunday. Overnight lows will be 51 tonight, then in the upper 40s for both Saturday and Sunday nights.

A 60 percent rain chance is in the early Saturday forecast, moving out and partial clearing to begin later in the afternoon. Sunday will be the best day weather-wise with partly sunny skies and a Northwest wind around 5 mph.

Sunny skies remain on Monday with a high near 72.

Below is the day-by-day forecast (subject to change) from the NWS. And for more weather information, visit: NWS Newnan Page.

FRIDAY – Partly sunny, with a high near 70. North wind around 5 mph becoming southwest in the afternoon.

FRIDAY NIGHT – A 30 percent chance of showers, mainly after 2am. Mostly cloudy, with a low around 51. Calm wind.

SATURDAY – Showers likely, mainly before 1pm. Mostly cloudy, with a high near 64. Calm wind becoming southwest around 5 mph. Chance of precipitation is 60%. New precipitation amounts between a tenth and quarter of an inch possible.

SUNDAY – Partly sunny, with a high near 70. Northwest wind around 5 mph.

SUNDAY  NIGHT – Mostly clear, with a low around 45.