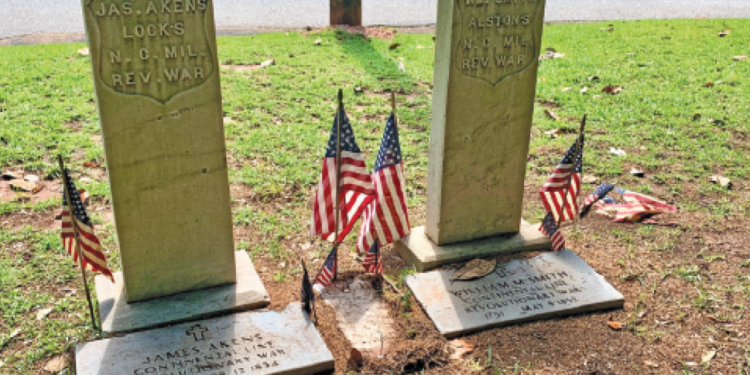 The American Revolutionary War or the American War of Independence was fought from 1775 to 1783. Though Coweta County was founded several decades later in 1826, the county was home to several Revolutionary War soldiers. Three of these soldiers are buried at Oak Hill Cemetery: William Smith, Randall Robinson, and James Akens.

Wiilliam Smith, born in Nansemond County, Virginia in 1751, enlisted in the Revolutionary War in 1778 and served eighteen months before reenlisting in 1780. During his service, Smith was wounded twice: once in the hip at the Battle of Long Crossway and the second time in the face at the Battle of Colonel Philip Alston’s House, both in North Carolina. Smith’s fiery demeanor and resolute spirit earned him the moniker “Hell Nation.” On March 26, 1835, he married Meredy Gamage in Coweta County with whom he had two children.

Randall Robinson was born in Granville County, North Carolina on May 2, 1762. Robinson served for a short time in the Revolutionary War in both North and South Carolina. He served in North Carolina from January 1, 1777 to November 15, 1778 and served 180 days in the Waters Regiment in Edgefield County, South Carolina. After serving in the war, Robinson bought 25 acres in Edgefield District, South Carolina before moving to Putnam County, Georgia in 1807. Between 1825 and 1827, Robinson moved to Coweta County as one of the area’s pioneer settlers. He bought a plantation two miles east of the courthouse in downtown Newnan where he grew cotton and had several slaves. Later, Robinson moved closer into town where he built the first frame house in the Coweta settlement. On February 25, 1842, Robinson died in Coweta County. His epitaph, located in the family plot at Oak Hill, reads: “In memory of Randall Robinson, who departed this life on the 25th day of February 1842, in the 80th year of his age, He served a short time in the Revolutionary War, and was for many years a member of the Baptist Church.”

The last Revolutionary War soldier buried at Oak Hill is James Akens (Aikens). Akens was born in 1762 or 1763 on the Pennsylvania-Maryland line. He enlisted in October 1778 while living in Mecklenburg County, North Carolina and served six months as a private in Captain Brownfield’s Company. Akens was granted a pension on September 5, 1832 while a resident of Coweta County and died in the county on April 12, 1843.

The three men, who fought 245 years ago, are officially celebrated on February 24—the day was pronounced “James Akens, William Smith, and Randal Robinson Day” in Newnan by councilman Ray DuBose during the dedication of the men’s markers in Oak Hill Cemetery. However, with July as our nation’s birthday, it presents the perfect opportunity to remember the Coweta citizens who fought for our freedom.