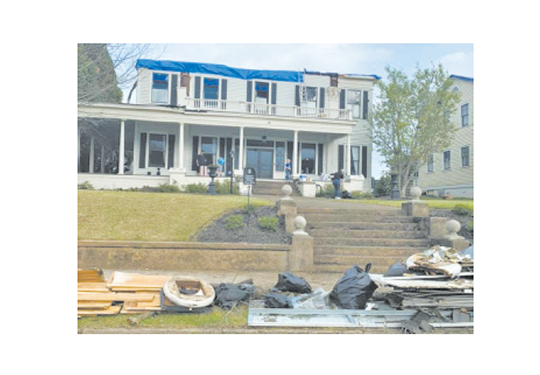 Usually when I write these monthly articles, I conduct research and consult archives to describe a historical moment or story from our county’s past. Conducting research is quite possibly my favorite part of being the director of the Newnan-Coweta Historical Society.

I love the history of my hometown, and I truly believe that our town has one of the richest, most beautiful histories in our entire country.

Much of Newnan’s history is wrapped up in its nickname “The City of Homes.” There are many theories as to how the city got this nickname.

Many believe that the moniker developed due to the wealth in Newnan during the late 19th century. After an investment into the railroad system by leading Newnan citizens during the mid-1800s, Newnan saw a dramatic increase in economic prosperity, even becoming one of the wealthiest towns per capita in the United States for a period. The city became known for its “tremendous and beautiful homes,” especially for being such a small town. Others believe that the nickname derived from Newnan’s status in the Civil War as a hospital town. Due to its role in the Civil War, Newnan was spared much of the action during the War and the town was spared from destruction. Regardless of how Newnan received its nickname, the grand antebellum homes have stood as a beautiful reminder of Newnan’s history.

It certainly was devastating when we watched these homes that have stood for over 200 years fall during the EF-4 tornado that hit Coweta County on the evening of March 25. One of the worst hit homes was the Simms home on Lagrange Street. This house was built between 1870 and 1880 by Civil War Captain John Simms. The home was known for its wraparound porch and four fluted Corinthian columns and pilasters. After the tornado, the columns were destroyed along with the entire second floor of the home. Especially as an individual whose job is focused on preservation, the photos of these damaged and destroyed historic homes made my heart hurt.

However, as I reflect on our City of Homes and witness the response to the disaster, I think back to the reason that I love history so much and why I decided to study history. History is not about facts, figures, or dates; rather it is about people, their story, and the impact that they leave behind. There is a relatively new theory in the humanities field called microhistory, which essentially states that the narrative of our history is not told from a global perspective or from a “zoomed”-out point of view. Rather it is the collective story of each individual that makes up our history. It is everyone’s experiences that teach out about our past. American sociologist C. Wright Mills summarized the concept with this quote, “Neither the life of an individual nor the history of a society can be understood without understanding both,” meaning that we must understand the story of each person in order to understand the story of our community and world.

What I see when I look at our community is the story of individuals. The outreach and response to the tornado has been unbelievable to witness. Our whole community has stopped and put lives on hold to help those in need. We’ve realized that it is our community members that matter – their stories, their needs, their thoughts.

Even though our houses were destroyed, we are still the City of Homes. Homes are full of people. It is the people that make a home such a special place, and Newnan has proven yet again that we are a family, we are a place that cares about each individual, we are a home.

Some things should be important all the ...