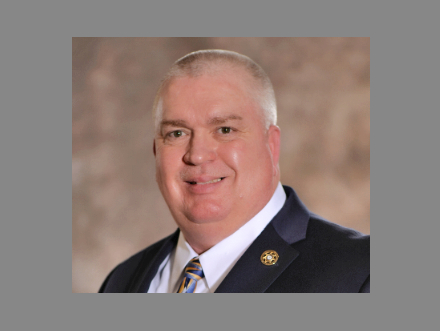 “I am thrilled that Larry Clifton has been accepted as my predecessor and will serve as the next Warden,” shares McKenzie. “Larry has been learning all aspects of the Corrections Division and I am confident that he will do whatever it takes to make this facility one of the best in the state. He has a top notch team to continue to accomplish our goal – to make it happen.”

“I am truly honored to be the Warden of Coweta County Corrections Division,” says Clifton. “My goal is to show others that loyalty, hard work and dedication isn’t overlooked.”

Clifton began his career with the Corrections Division as an Officer in October 1999. Shortly after, he was promoted to Shift Supervisor where he helped manage the offender population and staff while maintaining safety and security of the prison. He was then promoted to Lieutenant of Special Operations, Captain of Security, Major of the Work Release Center and most recently served as Deputy Warden of the Division. During this tenure, Clifton helped to accept state prisoners into the Work Release Center and assist local offenders in finding employment and leaving prison as productive citizens.

In addition to his work, Clifton participated in leadership development programs to better serve offenders and fellow staff. He completed the Coweta County Management & Supervisor Leadership Academy Program at West Georgia Technical College and is about to embark in a Professional Management Program at Columbus State University.

Clifton is married to his wife of 26 years, Sherry Lynn, and has three daughters: Kristen, Tiffany and Brittany. During his spare time, he enjoys fishing, hunting and golf, but is passionate about his life in public service.

About the Coweta County Corrections Division

The Coweta County Corrections Division is comprised of the Coweta County Prison, Work Release Center and Animal Services. Following its motto “make it happen,” the Corrections Division provides state offenders with safe and secure incarceration and helps them with re-entry services. Under agreement with the Georgia Department of Corrections, the prison houses 216 minimum and medium security offenders. Offenders are assigned to work details under the supervision of state certified corrections officers which in turn, offer a significant savings to county taxpayers. In 2005, the Corrections Division opened the Work Release Center with 64 beds as an alternative sentence for local courts and in 2016 expanded to house  state offenders returning to live in the Coweta Judicial Circuit. The Corrections Division is also responsible for caring for animals at the Animal Shelter and works with local animal rescue organizations and citizens on adoptions, as well as enforcement of ordinances relating to animal care and control.

#Repost @cal_winters ... After four years I have f