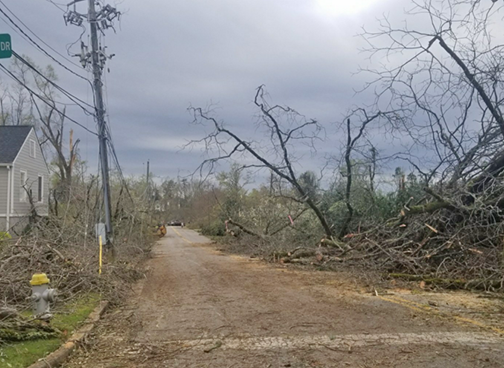 The National Weather Service in Peachtree City issued this public statement regarding the tornado which hit Newnan on Thursday, March 25.

Below is their complete report.

Throughout the day and evening of March 25th into the early morning of March 26th, several supercells moved into north and central Georgia bringing a few tornadoes, including a long-track, violent tornado through Newnan as well as straight-line wind damage, large hail, and widespread flooding.

The most damaging tornado originated from a supercell thunderstorm that first spawned a long-tracked EF2 tornado in Clay and Randolph Counties in Alabama just before 11 PM EDT (10 PM CDT). The tornado lifted near the state line, but another tornado quickly redeveloped around 11:37 PM in western Heard County west of Franklin and continued almost 39 miles east-northeast through Coweta and Fayette County with maximum winds up to 170 mph occurring over southwest and southern parts of Newnan.

A violent, EF4 tornado that tracked 39 miles across Heard, Coweta and Fayette Counties first formed near Redland Dr north of GA-34 around 11:37 PM with only minor damage to trees. The tornado traveled east-northeast gradually gaining intensity and producing more widespread damage to trees and power poles on GA-34 1.3 miles west of Franklin. The tornado grew in size and strength as it entered Franklin and crossed the Chattahoochee River with winds around 130 mph and a path width around 850 yards or 1/2 mile.

Damage in Franklin was extensive with several homes heavily damaged or destroyed. Two homes had roofs blown off completely, and a large stand of pine trees was completely snapped or uprooted on the north side of Franklin. A large wall and roof of a large industrial building on Mary Johnson Dr were ripped off. The tornado continued east-northeast south of GA-34 and crossed into Coweta County around 11:54 PM.

The tornado gained strength as it moved along JD Walton Rd north Smokey Rd, then traveled along Smokey Rd with trees falling on some homes. Intensity increased to EF2 levels again near the Mountain Creek and Woodlawn Farms neighborhoods near where Smokey Rd intersects Fields Rd and Holbrook Rd.

Winds quickly increased further to over 150 mph (EF3 intensity) near Timberland Trail south of Smokey Rd. Many homes had major damage and one home had all but the back wall collapse. The family survived with no injuries by taking shelter in their bathtub. The tornado crossed Smokey Rd and Belk Rd and reached its maximum intensity of 170 mph as it entered the western city limits of Newnan. One home at the end of Fairview Dr had all exterior and interior walls removed. Four homes along Arlington Ct north of Lagrange St were destroyed with one having all exterior and interior walls removed but leaving a yellow vehicle nearly untouched in the garage. The path width at this point was approximately 1850 yards or just over 1 mile.

As the tornado moved east of Boone Dr it directly struck Newnan High School and surrounding athletics fields causing broken windows and doors and extensive roof and structure damage. The original Newnan high school building at 190 LaGrange Street was opened in 1952 (earlier report said 1888) with brick walls and sturdy stone and woodwork, yet the only wall failure was to a portion of the second-story brick wall near the front of the main campus building.

While the tornado did appear to weaken from this point onward, it continued into the southern part of downtown and passed directly over the county Justice Center and adjacent administrative building which houses the courts, 911 facility and many other government functions. Extensive roof and window damage and some interior wind and water damage occurred at the facility. Numerous homes continued to receive damage from winds and falling trees as it moved east-northeast, crossing E Broad St and Grieson Trail with 120-135 mph max winds.

The tornado became weak as it crossed I-85 and only caused minor damage to trees and businesses on the southern end of Ashley Park and a cancer treatment hospital. However, the tornado reintensified near the Windsong and White Oak neighborhoods near Shenandoah Blvd and White Oak Dr just east of the Newnan city limit, with max winds of 120 mph. As it continued east-northeast, it weakened again but still produced damage to trees and power lines, some falling on homes as it crossed Sullivan Rd and Lora Smith Rd and passed over the Thomas Crossroads area. In neighborhoods south of Andrew Bailey Rd north of GA-34, several homes had damage from falling trees. The tornado weakened further with more sporadic damage to several trees as it crossed Fischer and Minix Rds into Fayette County.

After the tornado crossed into Fayette County and northern Peachtree City, it snapped a few trees near MacDuff Parkway where homes were being constructed. Portable restrooms and other light construction materials were blown away or blown down. A few trees were downed on CSX railroad near Senoia Rd and along GA-74 near Kedron Dr. Large trees blocked the entrance to the Kedron Hills neighborhood at Loring Ln and Peachtree Parkway. The tornado finally lifted near Astoria Ln at the northeast end of Kedron Hills in Peachtree City around 12:30 AM, making the total path length 39 miles and lasting 53 minutes.

Surveys near the western portion of the track have concluded that the EF2 tornado in Alabama weakened as it approached the GA/AL state line. The tornado then lifted as it crossed County Road 296 in AL. The parent storm was undergoing a recycling process as it crossed into GA and a new tornado formed and touched down as it crossed Redland Road west of Franklin GA, approximately 4.5 miles east of its last damage point in Alabama.

WEDNESDAY'S NUMBERS ... Per the Georgia Department