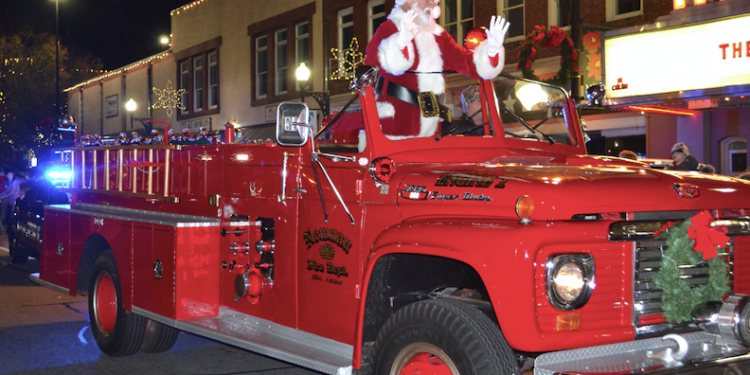 The City of Newnan’s annual Christmas parade will roll into downtown Newnan on Saturday, Dec. 14 at 6 p.m.

The parade will begin on Lagrange Street near Newnan High School, traveling against traffic on Lagrange Street, and making a right-hand turn on N. Court Square going around the square to end at Greenville Street. The parade is expected to include various floats, walking groups, decorated cars, trucks, and more.

This year’s theme is Christmas Movies, and participants were encouraged to incorporate ideas and elements from holiday, Christmas movies in their floats.

“For years, this parade has served as a well-loved tradition among our community, and this year the city is looking forward to new traditions and memories to share with parade onlookers,” said Ashley Copeland, Communications Manager for the city of Newnan.

The city’s Christmas Commission has chosen Mike Yeager to serve as the 2019 parade Grand Marshal. Yeager is the former longtime Coweta County Sheriff, who was confirmed last January by the U.S. Senate to serve as the U.S. Marshal for the Northern District of Georgia.

Each year, the city hosts a float contest that goes along with the parade. This year, each winner of the following categories will receive a parade plaque, a sign to display on their float the night of the parade and a monetary prize the following week.

Back by popular demand, there will be a People’s Choice award in which this category is an after parade award.

“This provides the public, parade attendees, and our followers on social media the opportunity to share, engage and vote on who they feel should take the title of ‘People’s Choice’ home,” said Copeland. The float with the most unrepeated ‘likes’ on the city’s Facebook page wins. To be eligible for the award the float must have won in the five categories on the night of the parade.