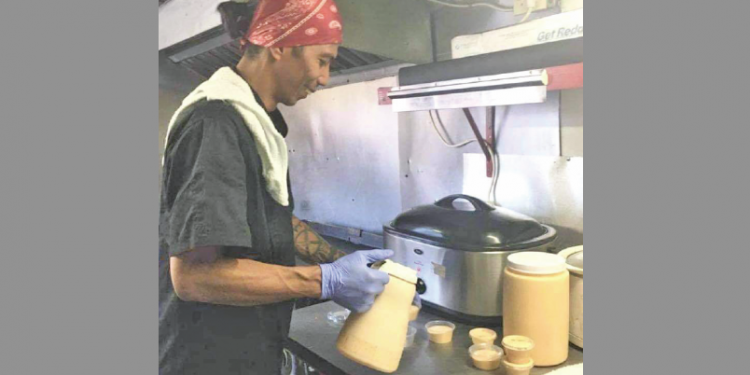 The Chefs column highlights our local culinary masters. They share a recipe that has a lot of meaning to them and thankfully, how to make it. (Well at least most of it, sometimes secrets must remain that.) This month’s chef is Frank Vargas.

I was born and raised in Manila, Philippines, home of the world famous egg rolls, Lumpia.

My love for cooking started after I got a full-time job at a Five-Star restaurant while studying at University. After graduating with a B.S. in Psychology, I got a job on a cruise ship. I had the privilege of traveling the world, meeting new people and trying the local cuisines, as well as working under executive chefs from France, England and Canada for four years.

After years of tasting the world, I found myself in Memphis, where I discovered my love of cooking Japanese food. Once I was trained I became a hibachi chef working in several states before ending up in Newnan, where I have worked at a local restaurant since 2008. Here I have finally found my home and sense of community.

Like many others, COVID-19 has changed my life in so many ways. Fortunately. I was able to open my food truck Japaneck Frank with the help and support from my family and good friends here in Newnan.

My special recipe is seafood sauce or as most people call it, Yum, Yum sauce. Every restaurant has their own version, but in the end, they all pretty much taste the same.

Melt one stick of butter with three tablespoons of paprika. Set aside.

Next, dice up one orange and one lemon (remove rind first) and half of a small onion.

Mix together in a bowl with half a cup of vinegar and three tablespoons of sugar.

Put that into a blender and blend until smooth. Then pour through a strainer into a bowl.

Take that residue from the bowl and mix it with the butter/paprika mixture.

Add one-half gallon mayonnaise and 1 cup of milk to the mixture. Put everything back into a blender and blend until smooth.