Ask The County Agent: ‘Should I be concerned about Murder Hornets?’ 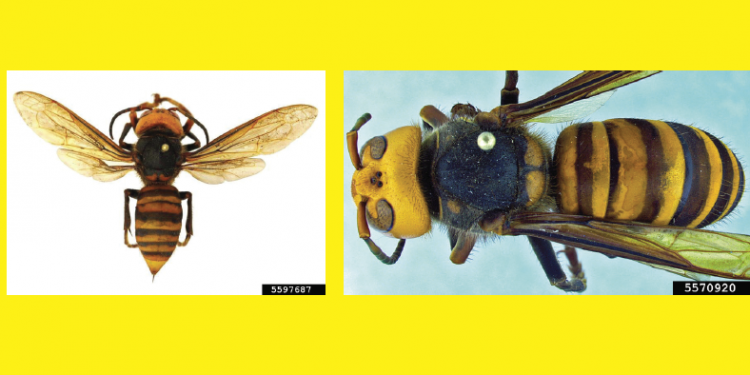 By Stephanie Butcher, Special to The Shopper

QUESTION: “I keep hearing about Murder Hornets. Should I be concerned?”

AGENT: Recent press coverage has created renewed interest in the Asian giant hornet, Vespa mandarinia. The coverage is not traced to any recent event, but the insect was found September 2019 in Vancouver Island (Canada) and again in December 2019 in Washington state. But it has not been found in Georgia or even east of the Mississippi River.

The Asian giant hornet is a “true” hornet and the world’s largest, ranging in size from 1.5 to slightly over 2 inches long (38-50mm). The stinger is nearly ¼-inch long and stings are extremely painful. Each year in Japan, 30-50 people die from being stung by these hornets.

The venom is not the most lethal among bees and wasps, but due to the insect’s large size, the dose is larger than any other stinging insect Americans typically encounter. Human sting deaths are biased toward individuals who are prone to anaphylactic reactions or to individuals who receive large numbers of stings. One or a few stings from an Asian giant hornet should not be life-threatening to an average individual.

This hornet is not necessarily aggressive towards humans, livestock or pets but like many other stinging insects, it will sting if provoked. Of major concern though is that it can devastate a honey bee colony, with several hornets capable of annihilating 30,000 bees within hours.

There are three phases to an Asian giant hornet attacking a honey bee colony. The first is the hunting phase where individual hornets will capture bees at the entrance of the colony, cut off their heads, and form a “meat ball” from the thorax. They then return to their nest to feed their young this protein-rich meal.

The second phase is the slaughter phase. Hornets will mark a particular colony with a pheromone to recruit their sisters to the site. Numerous hornets will descend upon the colony, killing all of the workers by ripping their heads off, dumping their bodies onto the ground below, and returning to their nest with their prey.

Once the beehive is dead, hornets enter the occupation phase. Hornets take over the hive, collect pupae and larvae, and return to their own nest to feed their carnivorous young.

The aftermath of an attack will be piles of decapitated or ripped apart bees in front of a colony. The visible key to an Asian giant hornet attack is “decapitated” or “ripped apart” bees, and not just a pile of intact dead bees, which could be the result of pesticides, starvation or something else.

Again, there have been no confirmed cases of this hornet’s presence in Georgia or anywhere outside of Washington state, but you may see other wasps and hornets that may be confused with the Asian giant hornet:

At this time, we need to be vigilant but not over-reactive since there is no evidence that the Asian giant hornet has journeyed East. However, sightings and/or disturbances to honey bee colonies should be reported.

If you think you have seen an Asian giant hornet, found evidence of an attack (decapitated or ripped apart bees) or have a specimen, please contact the Coweta County Extension office at 770-254-2620 or [email protected].

For photos and more in-depth information about the Asian giant hornet, please check out the following: